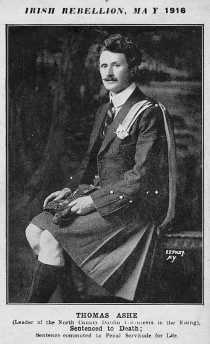 An image of Thomas Ashe (1885-1917) wearing a traditional pipe band costume. The image was reprinted as a postcard.

An image of Thomas Ashe (1885-1917) wearing a traditional pipe band costume. The image was reprinted as a postcard.

There are many interesting historical figures with connections to the Fingal area. Here we will explore their lives and the influence they had on society.

In the eighteenth and nineteenth centuries, there were robbers and thieves, just as there are today. Some of them were quite famous and were glamorised in folklore and in the media. Here we will take a look at two of these. The first is Luke Ryan, a pirate born in the Fingal area. The second is Michael Collier, a notorious highwayman who robbed coach loads of travellers on the roads of North County Dublin.

William Rowan Hamilton, on the other hand, was and remains world-famous as a great mathematician and scientist, who contributed an enormous amount to his fields of study. He was based at Dunsink Observatory in Castleknock for much of his career.

Finally, we will learn about two well-known Irish nationalists with connections to Fingal. The first, Thomas Kettle, was an Irish nationalist who fought for the British in the First World War. He was also a poet and a barrister. The second, Thomas Ashe, was a revolutionary who commanded the Fifth Battalion of the Fingal Volunteers during the 1916 Rising.

Click the navigation arrow to learn more about these fascinating historical figures.