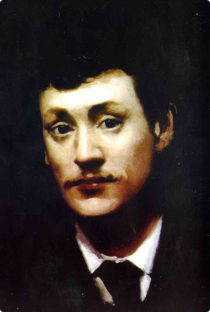 The nineteenth century was a time of great change in the methods and styles of artists especially in Western Europe. As the century began, the Classical style painted indoors in studios received universal approval. Artists painted historical and mythological figures in this approved tradition.

However over time younger painters grew dissatisfied with this rather stilted style and instead preferred to paint from nature, out of doors, hence the term 'plein-air' painting. They painted landscapes and often portrayed peasant life using colours and themes from the world around them. Paris and its rural hinterland became increasingly important in the context of this new artistic movement.

A further development was that young artists travelled out from the city and began to settle in the country. They founded artists' colonies in the vicinity of Paris in the Forest of Fontainebleu in such places as Barbizon and Grez-sur-Loing. These artists later became famous names in the world of art. In the 1840's and particularly towards the end of that decade, Rousseau, Millet and Corot lived or worked in Barbizon. Grez-sur-Loing was popular not only with native French painters it was also frequented by painters from abroad.

By the 1870's Frank O'Meara the young Carlow-born artist had arrived there from Paris. He associated with many artists there where he was free to depict nature in an ideal rustic setting. In the following decade he met with William Stott of Oldham and Irish painters John Lavery and Roderic O'Connor. There they shared their talents and ideas during the years that followed. Although O'Meara returned home to Carlow in ill-health in the spring of 1888, some of his associates continued to visit Grez-sur-Loing. However after his untimely death and particularly by the opening years of the twentieth century its importance as a colony had diminished considerably.