The mountain avens is an Arctic-Alpine plant. It flowers abundantly in sheets of cream and gold in the Burren, Co. Clare.

The mountain avens is an Arctic-Alpine plant. It flowers abundantly in sheets of cream and gold in the Burren, Co. Clare.

Habitats refer to the places where species live.  Ireland has many different habitats, some of which are rare elsewhere in the world.  These include peat bogs, limestone pavement such as the Burren in Co. Clare and sand dunes and machairs (flat sandy plains on the north and west coasts).  Because it was separated from mainland Europe a long time ago Ireland has a relatively small number of species but some species found here are not found anywhere else in the world.

A summary of Ireland ’s biodiversity is shown below. 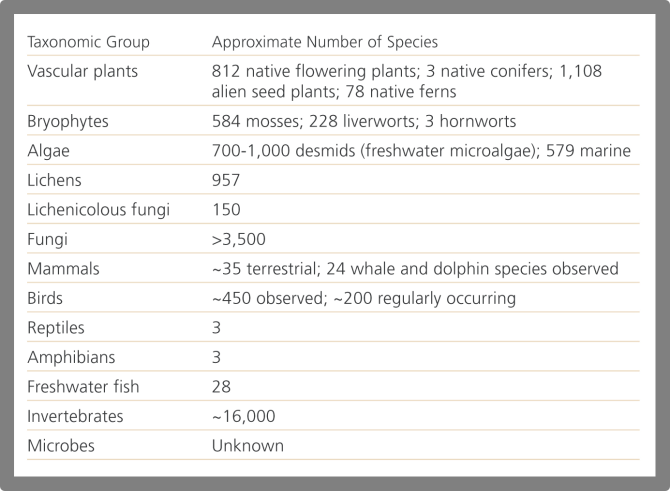 In Ireland 52 per cent of species listed under the Habitats Directive are in a favourable state. These include most species of bat, dolphin and whale. The number of species considered declining in status is low. Aquatic species are most at risk, although species such as the otter and especially the frog are doing very well. The natterjack toad is assessed as “bad but improving” (EPA, 2019).

The majority of Ireland's habitats that are listed under the Habitats Directive were reported in 2013 to be of inadequate or bad conservation status . Only 9 per cent of listed habitats are considered to be in a favourable state (EPA, 2019)

Previous - The Coast
Next - Flora and Fauna