The Voyage of Brendan the Navigator 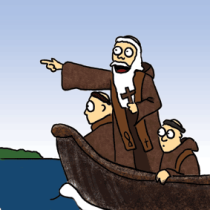 Irish monks often travelled to other countries to spread the gospel. In 563 AD a famous Irish monk called St. Columba travelled to Scotland to teach people about Christ. He founded a monastery on the island of Iona in the Hebrides in Scotland. Another monk, St. Brendan or Brendan the Abbot, was also a travelling monk. He is thought to have been born in 489 AD near Killarney in Co. Kerry. He lived until approximately 570 or 580 AD. St. Brendan founded many monasteries, such as Ardfert Cathedral in Co. Kerry and Clonfert in Co. Galway.

Records show that St. Brendan undertook many sea voyages around Ireland, Wales and western Scotland before he undertook his famous journey to the New World (America). A story written in Latin describes this journey. This story tells that Brendan and the other monks saw a volcanic eruption. The story also describes how they saw crystal floating in the sea and that they were chased by a sea monster. Some people doubted that a boat made of ox hides could have made such a long journey. However, a sailor and geographer named Tim Severin recreated the sixth-century voyage of St. Brendan in 1976 and 1977.