What did the government do to help people during the famine?

Ireland was under English rule at the time of the famine and the parliament was in London. When the potato blight ruined the first potato crop in 1845, Sir Robert Peel was the prime minister. He knew that most Irish people would have nothing to eat. In 1846, he shipped some Indian corn to Ireland and arranged for it to be sold in different parts of the country for a cheap price. This helped some families, however the poorest people had no money to buy it. The corn was also difficult to get to some of the most remote places where the famine was worst and where the roads were bad. Another problem was that people had to cook the corn, however they often did not know how to cook it as they had never eaten it before. This corn was so hard it became known as “Peel’s Brimstone”. 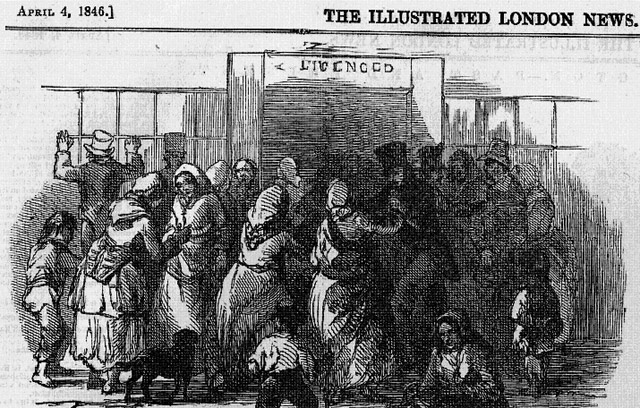 Robert Peel also set up relief work where people were paid to work. The government paid poor people wages to do work such as building roads or piers. However, the money they were paid was very low and the food prices were high. The wages did not allow the workers to buy much food for themselves and their families. However, it did help to feed many people and during 1845 no one died of famine. Peel also set up relief committees in each area to collect money from wealthier people by collecting taxes.

Second failure of crops in 1846

In 1846, the second crop of potatoes failed in July and August. People who had managed to survive the first crop failure of 1845 were now in terrible conditions. A new prime minister called Lord John Russell took charge of   the government in England. He reduced the sale of cheap food and thought instead that giving employment was the best thing to do. Public works began again in October 1846. The government thought that this employment would help the poor to buy food. However, poor people were often too weak from lack of food to be able to work very hard and wages were often not paid on time. 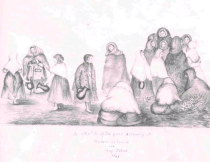 A Sketch of Edgeworthstown's poor during the Great Famine. This was taken as they assembled for soup in February 1847.

A Sketch of Edgeworthstown's poor during the Great Famine. This was taken as they assembled for soup in February 1847.

By February 1847, there was huge snowdrifts and the poor had no warm clothes to work outdoors in cold and wet weather. When the father of a family became sick or died after working on the public works, the women or children in the family tried to take over the work but it was very hard and involved carrying heavy loads or digging. This type of work was not useful in helping the people who were starving.