The Vikings were traders and were also skilled blacksmiths and metalworkers. Many settled in places like Russia, Iceland and Greenland. Many Vikings also settled in Ireland and set up towns along the coast such as Dublin, which they starting building in 841, and also Wexford, Cork, Limerick. These new towns meant that trade between Ireland and Europe developed.

Many of the Vikings married Irish people and they became known as the Irish-Norse. However, the Vikings and the people who already lived in Ireland did not always agree and continued to fight each other. Sometimes some Irish kings joined with a Viking leader to attack another Irish chief or king. Warfare was therefore common at this time. 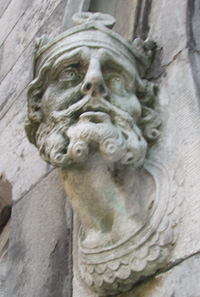 A great battle, known as the Battle of Clontarf, took place in 1014 just outside Dublin. At Clontarf, the strongest king in Ireland, the Irish high king Brian Boru, fought and defeated a Viking army. After this battle, peace began to develop between the Vikings and Celtic peoples and they gradually adopted each other’s ideas and customs.

We know about the Vikings because they buried things like jewellery, tools, weapons and household goods in their graves. Sometimes entire ships were buried with important people. The Vikings also settled in parts of England and in a region of France now called Normandy.