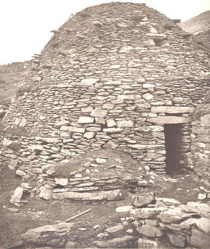 Monasteries had some of the first schools in Ireland. They were places where people came to study how to read and write. Look at this picture of a very old Irish monastery.

Can you imagine what it was like to study in one of those small cells? It would not have been very comfortable.

A famous monastic school was in a monastery in Armagh which was founded about the time of St. Patrick in the 5th Century. It was famous because of the Book of Armagh

The Book of Armagh

An illustration of the Book of Armagh which is now preserved in the Library of Trinity College Dublin.

Courtesy of 'A social history of ancient Ireland'.

, a precious and beautifully bound manuscript that was written there over a period of time from about 808A.D. 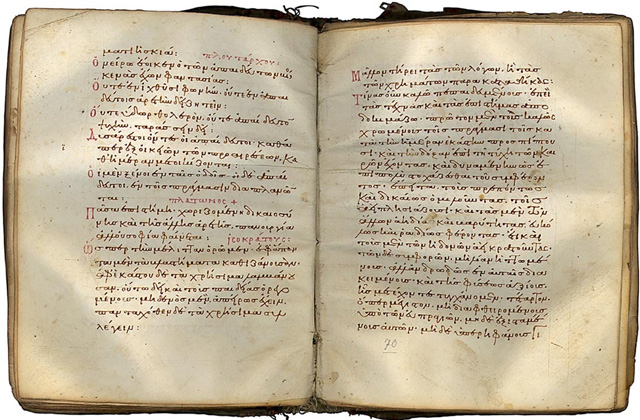 Book written on Vellum.
The Schoyen Collection MS2455.
We can examine evidence of what scholars learned in monastic schools by examining this book which is now preserved in the Library of Trinity College, Dublin. It is written on vellum which is calf skin. The writing, or penmanship, in the Book of Armagh is beautiful and in colour.

In monasatic schools writers called scribes learned to write, understand and draw the message of the Bible, usually in Latin. The Book of Armagh also shows us evidence of writing in the Irish language from long long ago. This is very rare and precious. The Book of Armagh has the Gospels according to Matthew, Mark, John and Luke as well as the story of the life of St. Patrick and other documents copied into it by the monks.

What do you think students learned?

What do you think students learned?