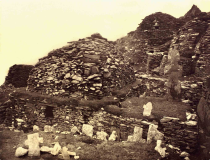 Photograph of monastic cells and burial ground at Sceilig Mhichíl. Taken from the first volume of Dunraven's Notes on Irish Architecture, 1875.

Photograph of monastic cells and burial ground at Sceilig Mhichíl. Taken from the first volume of Dunraven's Notes on Irish Architecture, 1875.

Edwin-Richard-Wyndham Quin, third Earl of Dunraven (1812-1871) spent the summers of 1866, 1867, 1868 and 1869 travelling through the places in Ireland he knew well, and investigating the ecclesiastical remains of the localities that were new to him. Tory Island in County Donegal is the only place which escaped the Third Earl’s notice. On these trips he took a photographer – Mr Mercer - as well as Dr Stokes of Dublin and his daughter – Miss Margaret Stokes – the editor of this work.

His son – who wrote the preface to the book – points to these long expeditions as accelerating his bad health, which led to his eventual death in October 1871. The completion of the book was left to Miss Stokes, who had been with Edwin on numerous Irish tours. She arranged his notes after his death, including photographs, sketches, ground plans and manuscripts.

The result was two volumes with 125 illustrations, most of them large photographs.

What may be called the spirit of ancient Irish architecture is brought out in this book in a style never previously attempted in pictorial representations.

In his early life, Edwin, Third Earl of Dunraven was a prominent archaeologist. At Eton he showed a strong interest in astronomy, and he afterwards spent three years at the Dublin Observatory under Sir William Hamilton. He was also deeply involved in the study of Irish antiquities, and was a prominent member of the Royal Irish Academy, the Celtic Society, and several Archaeological associations.

Previous - Gregory: The Kiltartan Wonder Book
Next - Borlase: The Dolmens of Ireland