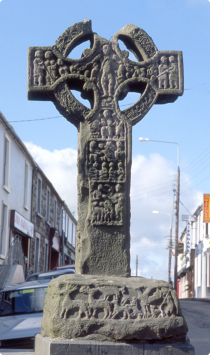 High Crosses on old Irish monastic sites are among Ireland's greatest contributions to European sculpture. They are characterised by the addition of a ring at the junction of shaft and arms, which helps to prevent the heavy arm-ends snapping off. But the ring was probably also intended to be seen as a cosmic symbol to visualise the Christian belief that the Crucifixion - at the centre of most High Crosses - was the most important event in the history of the cosmos. What additionally makes the Irish High Crosses so unusual is the application to the surfaces of the cross of stone-carved panels illustrating biblical events from the Book of Genesis to the Last Judgment. Each cross has a different selection of narrative scenes, suggesting their help in preaching a variety of themes to what was probably a largely unlettered laity. In contrast to other figural representations in early Irish art, which were generally stylised, the sculptured figures on the crosses are more naturalistically represented, suggesting that they were derived from cultures where sculpture from the classical world was practised or imitated, and ultimately going back to the iconography of Late Antique Rome.

The richest of the crosses are found in the east and midlands - at Kells, Monasterboice, Clonmacnois and Durrow - where one master mason may have been at work. Another mason's masterpiece can be seen at Moone, Co. Kildare. Other crosses, in and around ancient Ossory, prefer to concentrate on purely geometrical decoration, as at Ahenny in Tipperary, which shows that the crosses - like the early churches - were copied in stone from models in other materials, including wood and bronze.

Most of these crosses date from the ninth and tenth centuries, after which there is a gap before crosses re-appear again in the twelfth century with a very reduced selection of biblical scenes. These late crosses concentrate instead on figures of Christ and a bishop standing out in high relief, as at Roscrea, Co. Tipperary, or Dysert O'Dea, Co. Clare. 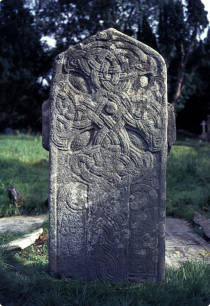 In addition to the High Crosses, early religious sites have a number of standing slabs bearing crosses and/or the figure of Christ. One remarkable example at Fahan Mura, Co. Donegal, has decorative crosses in relief and, unusually, an inscription in Greek. The earliest documented cross-decorated stone is that at Kilnasaggart, Co. Armagh, which may date from the early eighth century. Recumbent slabs, well exemplified at Clonmacnois, often bear crosses and an inscription asking a prayer for a named individual who, however, can rarely be identified with anyone mentioned in historical sources. Adherence to liturgical practices at particular times of day is recalled in the rare but attractive sun-dials at places such as Nendrum in County Down or Kilmalkedar near the end of the Dingle Peninsula.

Previous - Round Towers
Next - Abbeys and Friaries