Hart: The Flora of Howth 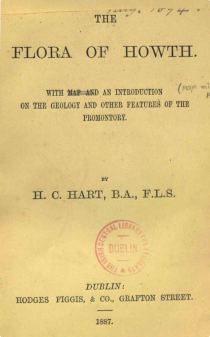 The Flora of Howth by H.C. Hart published in 1887 is a description of the wide varieties of flora found on Howth Head, an area of natural beauty on the north side of Dublin Bay, a few miles from Dublin city centre.

Howth Head was originally an island and is now attached to the mainland by a sandy peninsula. The north and eastern sides has steep rocky cliff faces while the centre of the island above 500 feet is heath-land covered in gorse. The town of Howth with its sheltered artificial harbour is on the northern shore. The small island of Ireland 's Eye with a shore of a mile circumference lies just offshore. The most prominent plants on the headland are gorse and wildflowers. Hart's book describes in great detail a large variety of this flora.

For centuries Howth Head was a playground for the people of Dublin city and county and remains popular with sightseers, tourists, bathers, anglers and sailors. It also remains popular with nature enthusiasts who come to study its flora and fauna, especially its seabird colonies.

Henry Chichester Hart (1847-1908) studied botany at Trinity College , Dublin . He was a naturalist on the British Polar Expedition commanded by G.S. Narues in the 1870s. He also was a participant in the Palestine Expedition of the early 1880s. He collected many examples of flora on his expeditions and also wrote at length about the flora of Ireland . Hart also edited the works of Ben Johnson and William Shakespeare.

In the late 1880s Hart made a wager with R. M. Berrington, a fellow naturalist that he could cover a return journey 111km between Terenure and Lugnaquilla, Wicklow in 24 hours. He succeeded and his feat is commemorated by the Hart Walk every August Bank Holiday weekend.

Previous - Cosgrave: North Dublin City and Environs
Next - Joyce: The Neighbourhood of Dublin