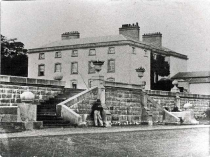 Photograph of the Main House, Woodstock, Inistioge, County Kilkenny taken from the Gardens

Photograph of the Main House, Woodstock, Inistioge, County Kilkenny taken from the Gardens

Woodstock House and its vast gardens is situated in Inistioge County Kilkenny. It was built for Sir William Fownes in the period 1745-47, and designed by Francis Bindon, one of the most prominent architects of the time. This three-storey building was built of stone and lined on inside with brick.

The facade is made of limestone and local marble and is highly decorative. A broad flight of steps along with an extensive plateau led to the entrance hall. Behind the steps and below the level of the ground floor windows lies the house plinith which is darker in colour than the main façade. This contains four porthole windows two on either side of the entrance way, these were to emphasise the strong nature of the façade. The entrance itself was formed by the doorway and two flanking windows forming a single composition. Above the doorway is a niche with an arched top that originally contained a statue of a classical figure, but this statue was removed sometime around 1900 and replaced with an urn.

In the years 1804-1806 single storey wings over a raised basement were added to the main house from the designs by local Kilkenny architect William Robertson. The wings differed from the main house in that no vaulting was used. The service yards each side of the house were also added at the same time as the wings. 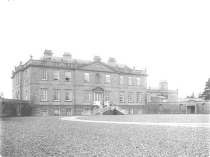 Photograph of the front of Bessborough House, Piltown, County Kilkenny

Photograph of the front of Bessborough House, Piltown, County Kilkenny

Francis Bindon was born at Clooney, County Clare around 1698. Francis' early career was as a painter. He traveled extensively around Europe. His visits to Italy were to havea major influence on his architectural style later. He became quite a successful portrait painter, painting Jonathan Swift among others.

He then began to study architecture under the Surveyor-General, Sir Edward Lovatt Pearce. Although he was not formally trained as an architect, he soon began to design houses particularly in his native Clare. The style he adopted was Palladian. In Kilkenny he designed not only Woodstock, but Bessborough in Piltown and Castlemorres in Aghaviller. He co-operated with Richard Castle on Russborough House in Wicklow.

Bindon's houses are all very similar in style. They have often being criticized for being unsophisticated but a lack of such intricacies was a hallmark of the Palladian style. However the Italiante aspect of the houses can strike a discordant note under Irish skies, particularly in the winter.

In 1761, Francis succeeded to the family estate in Clooney, County Calre and became M.P. for Ennis. He died in 1765.