The picture postcard soon became a part of the entertainment industry, a light hearted communication providing diversion and distraction for generations of Irish men and women, visitors and tourists. In its hey-day from 1890 to 1925 (pre radio and television) the public at large was ever keen for images of extraordinary events and happenings.

Royal visits to Ireland - King George 111 in 1903 and King George 1V in 1910 and again in 1911 - were popular topics for the postcard publisher. Writing to Master Archie Moore, Seafield, Easkey, Co. Sligo on 11 July 1911, his friend sends a postcard entitled 'Their Majesties crossing O'Connell Bridge on their return from the Garden Party' and asks -

'What do you think of the decorations of the beautiful street on the other side?'

At the opposite end of the spectrum, disasters, natural and man made, were always a popular topic for the postcard manufacturer. The flooding of central Belfast in September 1902 produced many postcards of streets under water. One such - 'Great Northern Terminus, Great Victoria Street' - shows a small boy in shorts wading across the street under the station clock which shows seven minutes past three exactly. A similar postcard published by Healy's of Dublin shows 'The Disasterous Floods at Bray, August 25th 1905 - Cottage near Dargle - Wall and Portion of Room carried away.'

Charles Russell, Royal Avenue, Belfast published postcards depicting the fatal airplane crash at the Balmoral Show in Belfast in September 1912; while the loss of the Belfast built Titanic in the same year produced a large number of remembrance postcards.

The public's appetite for entertainment was partly satiated by sporting postcards. Local and international sports were the subject of postcards by enterprising publishers. 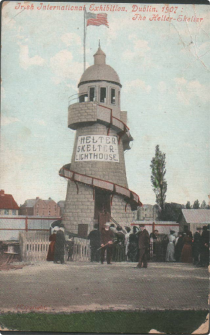 The Irish rugby team have featured as subjects since the early 1900's; and these cards often contain useful information. In 1912 South Africa beat Ireland 38 points to nil, and a year later England beat Ireland 16 points to 4 points. In 1914 Ireland registered a victory over Scotland by 6 points to nil at Lansdowne Road. In the same year a postcard was published recording the winning of the county championship by Cornafean 'Naoim Fionnain' Gaelic football team . Given the number of players named O'Reilly it is safe to assume that the team were Cavan champions. Lacross and soccer teams also featured in early postcards; and later motorcar, motorbike and horse racing also featured.

Exhibitions, shows and fairs were popular themes for the postcard publisher. The Cork Exhibition of 1902 and the Irish International Exhibition in Dublin in 1907 produced many informative postcards. These show the extent of the exhibits and the entertainment provided for those that attended - The Concert Hall, The Helter Skelter, The Art Gallery, The Somali Village, The Palace of Industries, and The Water Shute. The Dublin Horse Show since 1905 has also been a popular subject.

Humour, romance, beautiful ladies, greetings cards, Easter cards and speciality cards all catered to the postcard collecting mania. One speciality card depicting Muckross Abbey, Killarney, Co. Kerry was published by the Irish Paper Agency, Dublin in 1907 on paper made from turf, and bears the legend -
'This card is made from the soil of Old Ireland.'