View of Georges Street, with traffic and pedestrians

View of Georges Street, with traffic and pedestrians

An Teampall M¾r, "the big church", was, up until 1572, known as Corkatenny, a name that translated as "the kingdom of the descendants of Tenne". Tenne and his followers settled in the Templemore area around the 4th Century, where he built a fort. A contemporary of his, St. Sileßn, is thought to have introduced Christianity to the area, and the townland of Kiltilane (Kil Sileßn) was named in his honour. Between the years 900 and 1000 the territory known as ╔ile (Ely), in which Templemore, or Corkatenny as it was then, was to be found became the property of the O'Fogartys and O'Carrolls. 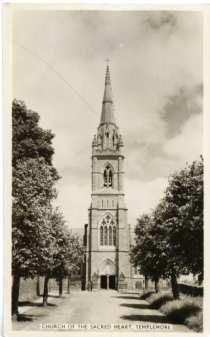 View of the entrance of the Church of the Sacred Heart, Templemore

View of the entrance of the Church of the Sacred Heart, Templemore

The Norman invasion introduced to Templemore two families that would have a huge bearing on the town in the years that were to follow: the Butlers and the Purcells. Sir Hugh Purcell arrived in Ireland with Strongbow, while Prince John granted Theobald Butler vast estates that covered counties Tipperary and Kilkenny. Sir Hugh's son, also Hugh, married Beatrix, daughter of Theobald, whose dowry included the baronies of Eliogarty and Ikerrin. The Purcell-Butler dynasty then fixed its base at Loughmoe Castle, near Corkatenny. In the 13th Century the Abbey of St. Thomas in Dublin erected a large church in Corkatenny, and it was this building that would later provide the settlement with its new name, An Teampall M¾r, in 1572. In 1582 the baronies of Ikerrin and Eliogarty, in which Templemore is to be found, were plundered by Ormond, thus causing a serious famine. Ormond, however, was able to prevent some of the native Irish of the Templemore region, the O'Meaghers and O'Fogartys, from rebelling, such was the influence he wielded over them.

The Rebellion of 1641 saw even the most loyal of subjects rebel against the English administration, and St. Leger, the Lord President of Munster, recorded that "most of the Co. Tipperary is in rebellion and it is led by the Baron of Loughmore". He was later indicted for his acts of rebellion, but the threat it posed paled into insignificance with the arrival of Cromwell in 1650. The clearance of families from the Templemore area for the Cromwellian plantation was thorough: too thorough, in fact. The Survey Commissioners had to appeal for four families to return, as, it is noted, "not one inhabitant of the Irish Nation that knows the country was left in the barony of Eliogarty." The Purcells and the O'Meaghers, two of Templemore's older and more established families, suffered much loss during this turbulent period.

The Cardens - A New Dynasty in Templemore


The 18th and 19th Centuries saw a new family establish itself in Templemore, the Cardens. Having arrived from Cheshire, John Carden, in 1698, leased land in the lordship of Templemore from the Butlers, from whom he purchased the estate in 1704. The castle that acted as their home stood in today's town park, but they deserted it in the mid 18th Century after it was damaged by fire. What became known as "The Abbey" was then built as the family home, supposedly on the site of a long lost monastery, but by 1902 the family had left the town. The Abbey then remained empty until the 1920s, when Auxiliaries took up residence there. When the building was later vacated the local Volunteers had the Abbey burned, thus destroying one of the most impressive legacies of the Cardens in Templemore.

Source - Walsh, "A History of Templemore and its Environs".