Photograph shows the condition of the Hell-Fire club building as it is today.

Photograph shows the condition of the Hell-Fire club building as it is today.

The Hell Fire Club, clearly visible on the skyline of the Dublin Mountains, is undoubtedly the area's most famous landmark. Situated at 1275 feet, near the summit of Mount Pelier, the site was originally a passage tomb. The tomb dates from the Neolithic Period (4500 - 2000 BC) and was constructed within a circle of large boulders known as a cairn.

Speaker Connolly built the house on Mount Pelier Hill in 1725. Connolly was one of the wealthiest men in Ireland; he had a Dublin house in Capel Street and a country estate at Castletown, near Celbridge. He constructed the club as a hunting lodge. Connolly is said to have destroyed the cairn while building the hunting lodge, making use of the boulders in its construction. Some time later the roof, which originally was slated, was blown off in a great storm. Locals attributed this misfortune to the work of the devil, in revenge for the destruction of the cairn. Following this event the lodge was seen locally as a place of evil. However Connolly replaced the slated roof with an arched one of stone.

The building consisted of two large rooms and a hall on the upper floor. A small loft was over the parlour and hall. The hall door was reached by a flight of steps. On the ground level was a large kitchen, servants' quarters and a number of small rooms. All the windows faced north, commanding a magnificent view of Dublin.

After Connolly's death in 1729, the Hunting Lodge remained unoccupied for a number of years until it was acquired by the infamous Hell Fire Club, from which it got its name. Hell Fire Clubs were established in the eighteenth century, and were associated with outrageous behaviour and depravity.

Richard Parsons, the first Earl of Rosse, established the Hell-Fire Club in Dublin in 1735. The president of the Hell Fire Club was named 'The King of Hell' and was dressed like Satan, with horns, wings and cloven hooves. One custom was that of leaving the vice-chair unoccupied for the devil - in whose honour the first toast was always drunk.

The Clubs became associated with excessive drinking. Scaltheen, a drink made from whiskey and butter was served in abundance during meetings of the Hell Fire Club. Malachi Horan, in the book, Malachi Horan Remembers, says how they always had scaltheen ready at the Jobstown Inn.

Another story about the club concerns a young Bohernabreena farmer, who curious to find out what went on at the meetings, climbed up Mount Pelier one night. He was found by the members of the Club, dragged into the building and allowed to see the nights' activities. He was found the next morning wandering around the area, unable to speak and tradition says he spent the rest of his life deaf and dumb, unable even to remember his name.

Picture shows aerial view of the Hell Fire Club as it is today. On top of Mountpelier Hill.

Members of the Hell-Fire Club

Painting showing the members of the Hell-Fire Club at one of their meetings. The members are in their club uniform and have the punch-bowl on the table in front of them. Meetings held in club on Mountpelier Hill

Members of the Hell-Fire Club -

Picture of the punch bowl belonging to the Hell-Fire Club. The club was situated on Mountpelier Hill. The bowl was used during the eighteenth century.

Devil at the Hell-Fire Club

Painting showing the devil at the Hell-Fire Club on Mountpelier Hill in South Dublin.

Devil at the Hell-Fire Club -

The Black Cat at the Hell Fire Club 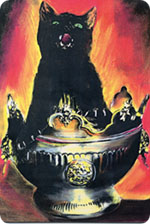 There were other stories about the club: one such story concerned a black cat. A young visitor to a local farmhouse insisted on going to investigate the Hell Fire Club. He was found dead the next day, lying face down in a mountain stream. His host believed that the boy had been murdered, and he asked a clergyman to accompany him up to the Hell Fire Club. When they got to the club, darkness was falling.

They knocked on the door, and it was opened by a tall black-cloaked man. When they entered the house, they were immediately grabbed from behind and hustled into the dining room. A banquet was about to begin, so the two men were pushed into chairs.

A majestic looking black cat stalked into the room and took his place at the head of the table. The priest noticed that the ears of the cat were not erect, but lying like horns at either side of the fierce looking head. The wide, deep eyes glared hatred at the clergyman, who rose to his feet, intending to leave the devilish assembly. He was grabbed and pushed back into his chair. Realising that he had a small bottle of holy water in his pocket, he threw it with all possible force at the cat, while, at the same time, he recited the prayer of exorcism.

Chaos erupted, but in the midst of it all, could be heard the terrified screams of the farmer. The priest continued to pray until the smell of sulphur and smoke forced him to leave the house. Outside he found the farmer lying on the ground, his face and neck deeply scratched by strong claws. The poor man never completely recovered. According to legend, the next morning, the burned out Hell Fire Club stood a ruin on the hill-top, as it does today.