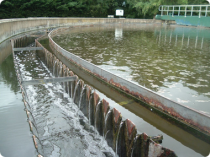 This is one form of how to treat wastewater to remove some of the large pollutants evident.

This is one form of how to treat wastewater to remove some of the large pollutants evident.

Wastewater is any water that has been adversely affected in quality by human activity or industry. It can be liquid waste discharged by domestic residences, commercial properties, industry, or agriculture, and can contain of a wide range of contaminants at different concentrations.

Even simple everyday activities like showering, brushing your teeth, cooking and using the toilet create wastewater. Organic matter present in wastewater comes from human waste, food, household waste and industrial discharges. Some of these organic products can be broken down easily in the environment but others are no so easily degraded.

There is a constant strain between wastewater infrastructure and a growing population. Dublin City Council faces this problem, even with the planned upgrade of the Ringsend Waste Water Treatment Plant. Its current capacity is 1.6 million population equivalent (P.E.) and the current extension would raise this by a further 500,000 to 2.1 million P.E. by the time of the extension's projected completion in 2015 (Dublin City Council, 2014). This is now being managed by Irish Water who have proposed an alternative solution. As the population of Dublin continues to expand, which will put further pressure on the plant.

Why Do We Need To Treat Wastewater?

The latest EPA report on urban wastewater had striking findings including:

If any person or water services authority wishes to make a complaint to the District Court regarding waste water discharge that may be causing environmental damage, a Waste Water Complaint Notice Form must be submitted, as outlined in the Water Services Act 2007 (Waste Water Complaint Notice Form) Regulations 2009. This form is available from the website of the Department of the Housing, Planning, Community and Local Government.

Details of the duty of care regarding waste water are outlined under section 70 of the Water Services Act 2007.

On 22nd June 2011, a new Regulation under the Waste Water Discharge (Authorisation)(Amendment) Regulations 2010 took effect. It states that a water services authority must obtain certification from the EPA for waste water discharges from a waste water works serving a population equivalent of less than 500. The latest EPA report on urban waste water can be found here.

On a European level, the European Communities (Waste Water Treatment) (Prevention Of Odours and Noise) Regulations were introduced on 7th December 2005. These Regulations set a legal requirement for waste water treatment plants to be designed, constructed, operated and maintained so as to avoid causing nuisance from odour emissions or noise.  Latest updates on EU wastewater regulations can be found here.