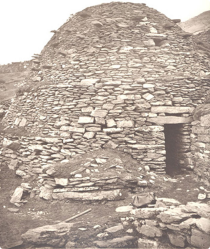 Irish monasteries became famous for their learning and many students came to study in them from other parts of Europe. Irish monks also spread Christianity across Europe. 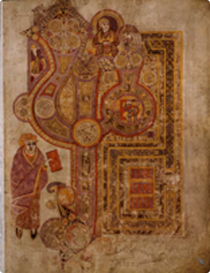 As well as praying and fasting, some monks spent their lives making beautiful copies of the Bible. The Book of Kells, written in the ninth century, about 800 AD, is a famous example of this. It was named after a town called Kells in Co. Meath where it was once kept. This book can now be seen in Trinity College, Dublin. Another famous book which was written by monks in Ireland is the Book of Durrow.

The monks often put valuable covers on their books and manuscripts. Book covers were often made of metal and decorated with valuables such as jewels. The monks also paid silversmiths to make gold and silver chalices. An example of these chalices is the Ardagh Chalice, which you can see in the National Museum in Dublin. The Ardagh Chalice was made in the eight century AD.

Previous - Early Christian Ireland
Next - The Voyage of Brendan the Navigator