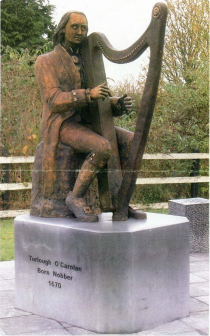 The Turlough O'Carolan statue sculpted by Ann Meldon Hugh was unveiled at Nobber in 2003. The statue is cast in bronze and shows the harper seated at his instrument.

The Turlough O'Carolan statue sculpted by Ann Meldon Hugh was unveiled at Nobber in 2003. The statue is cast in bronze and shows the harper seated at his instrument. 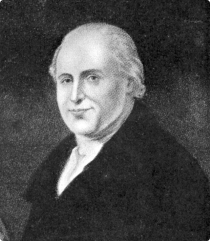 Paul O'Brien(1763-1820) was an Irish scholar and priest from Moynalty in County Meath. He was the first professor of Irish in Maynooth college and was the author of A Practical Grammar of the Irish Language published in 1809. He was also a poet.

Paul O'Brien(1763-1820) was an Irish scholar and priest from Moynalty in County Meath. He was the first professor of Irish in Maynooth college and was the author of A Practical Grammar of the Irish Language published in 1809. He was also a poet.

Carolan is frequently called the last of the bards and his passing is mourned because the travelling harper tradition largely died out with him. In the years after Carolan's death north Meath continued to produce literary scholars who excelled at speaking, writing and recording in Irish. The scholar Henry Morris (Énrí Ó Muirgheasa)wrote: "even when the last great rout came on the spoken tongue the poets of Meath continued to sing, and the scribes to write their songs . . .this is the peculiar glory of the Meath-Oriel district that the literary knowledge of the language accompanied the spoken tongue right down to its grave. In most other places the literary knowledge and cultivation of Irish had disappeared many generations before the spoken tongue died out " (Amhráin na Midhe, p. 9).

Clark's concern with recording the tradition of his own place is evident when in 1827 he sent to Edward O'Reilly in Dublin an account of Carolan's poem "Neilli Pluincead", composed in praise of Eleanor Plunkett  of Robertstown. Clarke's two books come directly from that literary tradition of the hidden Ireland. His first, Man's Final End (1824) is a vision of the resurrection. His second, Ireland's Dirge (1827) is a lament for the misfortunes of the Irish race down to Cromwell's war. This is the more interesting book as it also contains a lengthy section of historical notes, a humorous verse account of the author's tour in search of subscriptions and a list of about 320 subscribers.

Poet, scholar, priest and first professor of Irish in Maynooth Paul O'Brien was a gifted man who came to prominence in an Ireland stumbling out of the penal law era.

Carolan is said to have been his great-grand uncle. O'Brien was educated in hedge schools and studied for the priesthood on the Continent. Poetry was his first love and he wrote in both Irish and English and in macaronic verse, combining both languages. Many of his subjects are those of folk poetry with love and seduction being prominent among them. O'Brien was admitted to Maynooth in 1801 and became professor of Irish in 1804. His book, A Practical Grammar of the Irish Language, (1809) won him fame among Irish speakers. His work marks a creative link between the traditional Gaelic learning of the Meath hedge schools and the affluent Anglo-Irish classes who could afford to take an interest in Irish antiquarian studies in the last century.

Peter Gallegan, born in Ardamagh in 1792, was educated in hedge schools and became a hedge school-master in 1814 to 1826. Gallegan inherited the north Meath tradition of Irish learning and lore. A specialised aspect was the role of the scribe who copied old manuscripts and wrote new ones. In 1822 Gallegan compiled a manuscript of 800 pages, full of verses, songs, prayers, charms and prose pieces. He also recorded his own compositions and those of his fellow Meath poets like James Tevlin, Peter Daly, Bryan Clarke and Peter Coalrake and others. When Gallegan died in 1860 he was buried in the old Kilmainhamwood graveyard. No poet or composer survived who could honour him in the Irish language to which he had devoted himself in mind and spirit for a lifetime. In 1992 the O Carolan Harp Festival commemorated this important Meathman with the unveiling of a new headstone at his burial plot.

This is the title page of Henry Morris's book Amhráin na Midhe, published in 1933. Morris collected as many songs and poems by Meath poets as he could find. Most were copied from original manuscripts and Morris was instrumental in saving and disseminating works by local writers.

The poet and scribe and scholar Peter Gallegan (1792-1860) from Ardamagh, near Nobber, was commemorated in 1992. A new stone was placed on his grave in old Kilmainhamwood graveyard and his descendants were invited to the unveiling ceremony.