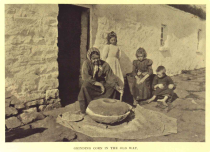 Robert Wilson Lynd (1879–1949) was an Irish writer, essayist and nationalist. Born in Belfast he became influenced by republican socialism during his time as an undergraduate at Queen’s University. As a Sinn Féin activist he became a contributor to The Republic (the official newspaper of Sinn Féin) during its early years.

Lynd moved to London in 1901 writing for a number of publications including Today, Black and White, the Daily News (later the News Chronicle) and the New Statesman (where he wrote under the pseudonym Y.Y.). While pursuing his career as a journalist in England he retained a close interest in Ireland and Irish nationalism.

Lynd was a prolific writer. His writings included endorsement of Irish resistance to British imperialism as well as denouncement of the Black and Tans during the war of independence. He also wrote the introduction for James Connolly’s Labour in Irish history (1917) (whose funeral he spoke at in 1916) as well as authoring the literary section of the Saorstat Éireann: Irish Free State official handbook (1932). Irish and English (1908), Home Life in Ireland (1909) and Ireland a Nation (1919) are among the numerous writings he published during his lifetime.

Home Life in Ireland focuses on various aspects of Irish society, politics and culture. From its exploration of life on an Irish farm, to its account of the particulars of food, politics, religion and public life, the work gives a broad overview of Irish life in the early twentieth century.

Previous - Hogan: Description of Ireland, in 1598
Next - Synge: In Wicklow and West Kerry