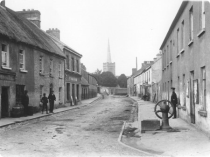 A photograph of Main Street, Athenry.

A photograph of Main Street, Athenry taken in the early twentieth century; the photograph is part of the Lawrence collection at Galway library.

A photograph of Main Street, Athenry.

A photograph of Main Street, Athenry taken in the early twentieth century; the photograph is part of the Lawrence collection at Galway library.

"All through the most savage part of the penal era the Catholics of Galway predominated not in numbers only but in wealth and territorial importance. Lords Clanricade, Athenry and Riverstown were Catholics. So too were the Burkes of Portumna, Milford, Clinske, and Gortmadden, the Daly's of Dunsandle, the Ffrenchs of Durras and Rahassane, the Donnellans of Caltrons, the Martins of Corbeagh and Tyllira, and numerous others". The earliest notice of the Athenry clergy occurs in the opening year of the century. Robert Blakeney, Mayor of Galway, reported in 1741: "I do find that John Brady a Popish Priest lately lived within the liberties of the said Corporation. Sometimes in the house of Patrick Brown in the town of Athenry and sometimes in the house of Charles French of Geethill near the said Town, and that he the said Brady lately quitted that neighbourhood but I could not find or learn that any other Popish clergymen live or can be found at any place within the said town or liberties thereof".

The Rev. Joseph Corr, C.Ss.R., in The Redemptorist Record, writes that the pupils of the Dominican school near Bresk led a very different life from that in the colleges of today. The students lived in groups and were housed in wattle-huts, and their relations and friends supplied clothing and food. The staff consisted of friars who had graduated at European universities, and the standard of education and culture was high. The intensification of persecution during the seventeenth century saw the suppression of the school, the friars were dispersed or exiled, many of them became chaplains in the Irish Brigade on the continent.