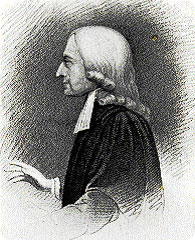 Contemporary drawing of John Wesley (1703-1791), founder of the Methodist Movement.

Contemporary drawing of John Wesley (1703-1791), founder of the Methodist Movement.

John Wesley visited Ireland on twenty-one occasions between 1747 and 1789.

On the first of these he landed at George's Quay on August 9th 1747.

It was then very different from its present appearance, the railway had not been developed, and there was no Custom House on the opposite side of the Liffey.

Indeed, the north bank of the river was then quite undeveloped.

Its development came during Wesley's lifetime and, on those occasions in later years when he either arrived at or departed from George's Quay, he would have noticed progress on the building of the Custom House.

The day of Wesley's first arrival was a Sunday and on that afternoon, he preached at what was called Evening Prayer in St. Mary's Church to 'as gay and senseless a congregation as ever I saw'. The Archbishop of Dublin strongly disapproved and Wesley did not again preach in any parish church in the archdiocese.

A brass plate, commemorative of the event, was placed in the church by the Dublin Methodist Council in the 20th Century. When the church ceased to be used by the Church of Ireland and the memorials were removed, this plate was taken to the nearest Methodist Church, the Dublin Central Mission on Lower Abbey Street, where it may be seen on the back wall by people attending services. 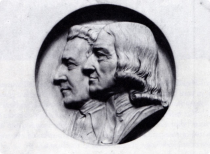 A Lutheran chapel stood on the east side of Marlborough Street and, in 1747, was no longer used by the Lutheran congregation.

The site may be that now occupied by the Abbey Theatre or a little to the north of it; in either case, it is within a couple of hundred yards of the Dublin Central Mission. Here, Wesley addressed his first Methodist meetings in Dublin.

Shortly after his departure from the city, a mob attacked the building, tore the wainscoting from the wall and piled it and the furniture in the forecourt, setting fire to the lot.

The panic occasioned by this soon subsided under the reassuring presence of Charles Wesley, John's brother, who arrived a week later and the Methodists used the repaired building off and on for the rest of the century.

John Wesley failed to obtain a freehold site for a building in Dublin and therefore took a ninety-nine year lease of a site in Whitefriar Street, on which the first Methodist chapel in Ireland was built and opened in 1752. It was a nearly square building with an internal porch, a gallery on three sides and furnished with backless benches. Men sat on one side of the building and women on the other, the division being carried through to the gallery, with access by separate staircases in the corners. Over the chapel was a hall of the same size, divided into rooms by moveable partitions, which could provide living accommodation for the preachers or meeting rooms of various sizes.

Later leases enlarged the site, which eventually contained the chapel, schools for boys and girls, an almshouse for widows, a bookroom and houses for two preachers and their families. When the lease fell due for renewal, the landlord was unwilling to renew. The neighbouring Carmelite Fathers wanted to expand their work and he wished to give them the site. The Methodist institutions scattered to other locations. For some time, the Carmelites used the chapel as a school for boys but later demolished it to make way for a purpose-built school.

The Methodists who had worshipped in Whitefriar Street found a new site on the south side of St. Stephen's Green, where they built a fine chapel to a design by Isaac Farrell. A significant difference was that the hall here was under the chapel. The façade was dominated by a handsome Ionic portico. The building was opened for worship in 1843, four years after the centenary of Wesley's commencement of Methodist work. For that reason it was called the Methodist Centenary Church.

Behind it the Irish Methodists built Wesley College, which later moved to a large sit in the outer suburb of Ballinteer. The church itself was burnt down in the 1960s. Happily, the façade survived and now graces a suite of offices which was built behind it.

We have noted that due to the opposition of the Archbishop, Wesley did not preach in any of the parish churches of the archdiocese after 1747. However, in 1789, Wesley led a large number of Dublin Methodists to the Cathedral for Holy Communion and was invited by the Dean, William Cradock, to assist in the administration of the sacrament. The chalices, which he used on this occasion, were stolen a few years later but replicas were made and these are now displayed in a special case in the Cathedral.

In 1770, the first Methodist chapel on the north side of the city was opened. It was for short while known as Hendrick Street Chapel and then as Gravel Walk Chapel, the name of the thoroughfare changing. Its final name was Blackhall Place. It was closed in the 1960s and sold. It is now badly defaced but is the only Methodist building in Dublin in which Wesley preached and of which there is anything remaining in the city.

At the time of Wesley's first visit to Ireland, the Archbishop of Dublin, Charles Cobbe, was building a new house for himself at Donabate. Thither Wesley rode on the Tuesday after his arrival and spent two hours in debate with the Archbishop, seeking to persuade him of the value of the Methodist societies. He was unsuccessful. Newbridge House is now the property of Fingal County Council and is open to the public. It was much altered by the Archbishop's son and about all that Wesley would now recognise, would be the Entrance Hall and the Study.

At the time known as Peafield Cliff, this house beside the park in Blackrock, turning its back on Mount Merrion Avenue, was once the home of the noted Dublin philanthropist, Lady Arbella Denny. Here Wesley visited her in 1783, describing the place as 'one of the pleasantest spots I ever saw. The garden is everything in miniature.' He left no record of their conversation. The house is still a private residence and is not open to the public.