What Is The Issue With The Hole In The Ozone Layer? 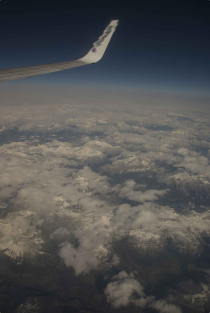 The Stratosphere from a plane

Ozone is held in the earth's stratosphere. The stratosphere reaches 30 miles above the Earth, and at the very top it contains ozone.

The Stratosphere from a plane

Ozone is held in the earth's stratosphere. The stratosphere reaches 30 miles above the Earth, and at the very top it contains ozone.

The ozone layer is a thin protective layer of gas 10km-50km above the earth, in the upper stratosphere. It acts as a filter for ultraviolet (UV) radiation from the sun. High UV levels can cause skin cancer, cataracts, as well as affecting the growth of plants.

A hole in the ozone layer has developed over Antarctica. Its size changes with the time of year and similar conditions have recently developed over the Arctic, with a small hole in the ozone layer observed there each spring. This is more serious because the northern Polar regions are much more densely populated than their southern equivalent. In 2011, scientists observed a record depletion of stratospheric ozone levels in the Arctic (38%). It is thought that a mix of cold temperatures, chlorine and an unusually strong Arctic vortex caused the unusual thinning. A further large depletion then occurred in 2015- 2016 at 27%. Chemistry climate models predict future cooling of the lower stratosphere if increasing greenhouse gas emission trends persist. Until levels of GHGs return to 1960 levels, similar events of large depletions may occur.

Over the world as a whole, the reduction in the amount of ozone is slight. The holes at the north and south of the planet are regarded as important early warnings of what might happen if the ozone layer continues to be damaged. There is often confusion between ozone depletion and anthropogenic climate change. The hole in the ozone layer is in the Earth’s upper atmosphere, whereas anthropogenic climate change is an unnatural warming of the lower atmosphere due to human activity. The main connection is that chloroflurocarbons (CFCs) contribute to both ozone depletion and global warming.

Unfortunately a number of man-made chemical compounds are responsible for the destruction of the ozone layer. CFCs are the chief culprits as these chemicals persist in the atmosphere for over 100 years, meaning they are intact when they migrate up to the ozone layer. There, the harmful particles are split apart by the sun’s UV radiation, releasing atoms of chlorine and bromine. These atoms then react with the ozone molecules, breaking them down and destroying them in the process.

CFCs were very popular with industry because they do not smell or affect the colour of liquids, like deodorants, and are non-toxic. They were used as propellants in aerosols, as cleaning fluids for electrical components and as coolants in refrigerators and air-conditioning systems.

An international treaty called the Montreal Protocol was signed in 1987, where the main players agreed to dramatically reduce their use of CFCs with a view to eliminating the hole in the ozone layer over a 50 year period.

Then in May 1989, 82 countries and the European Community decided in Helsinki to phase out the production of all CFCs before the end of the century. All products (aerosol propellants, refrigerator coolants, asthma inhalers etc) are now CFC free. Industry developed an alternative group of products - hydroflourocarbons (HFCs) - which offered the benefits of CFCs without the ozone depletion potential.The EU regulation on substances that deplete the ozone layer (the ODS Regulation, 1005/2009/EC), which in many aspects goes further than the Montreal Protocol, has also accelerated the phasing out of hydrochlorofluorocarbons (HCFCs)  from 2020 (EEA, 2019). Most (98%) of ozone depleting substances have been phased out (EPA, 2014). For further information on the production and consumption of ozone depleting substances see here.

We can also help:.

Previous - Is Climate Change The Same As Air Pollution?
Next - Banning Smoky Coal and Its Effect On Air Quality