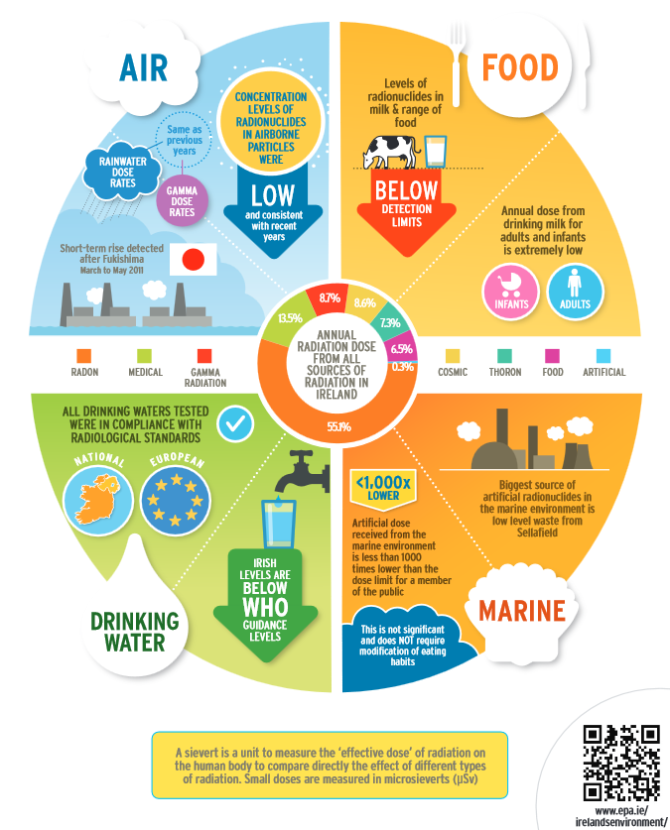 Radiation is ever present. Our planet is awash with radiation of all sorts, from harmless radio waves to more dangerous ultraviolet, X-rays and gamma rays. We are able to see some of this radiation (sunlight) that falls in the narrow visible spectrum from red to violet, but the radiation of environmental concern is invisible.

On average, a person in Ireland receives an annual dose of 4037 microsieverts (μSv) from all sources of radiation. The sievert is the unit of ‘effective radiation dose’ (dose) and takes into account the biological impact on the human body of ionising radiation.

By far the largest contribution to radiation dose (approximately 86 per cent) comes from natural sources. Man-made sources contribute approximately 14 per cent and are dominated by the beneficial use of radiation in medicine. Doses from other man-made or artificial sources account for less than 1 per cent. A comprehensive report puublished by the Environmental Protection Agency in 2014 provides detaisl on Radiation Doses received by the Irish Population and a video here explains radiation distribution doses in Ireland.

Everyone is exposed to a certain level of natural background radiation. For example, different locations around the country are prone to higher levels of radon gas, which can seep into buildings from underground and significantly increase the dose that occupants are exposed to.

The principal sources of natural radiation to which the Irish population is exposed are as follows:

Radon is a radioactive gas that occurs naturally in the ground and when it enters a building it can accumulate to unacceptable levels. For most people, radon is the major contributor to their total dose. On average, a person receives 1995 μSv per year from radon in the home and an additional 229 μSv from radon in the workplace. For individuals, there is very large variability in the dose received from radon. This radiation exposure, among all other sources of radiation, is probably the easiest to reduce.

On average, a person living at sea level receives 302 μSv from cosmic radiation – high-energy radiation from outer space reaching the Earth’s surface.  The dose varies with latitude and altitude but the variability across Ireland is extremely small. Air crew and airline passengers receive an additional dose from cosmic radiation. The dose received depends on the frequency of flights and the routes flown.

Radioactive elements occur naturally in all rocks and soils and have been there since the creation of the Earth. On average, a person receives 295 μSv every year from the radiation emitted from this source.

On average, a person receives 350 μSv per year from exposure to thoron. Thoron, like radon, is a naturally occurring radioactive gas. Unlike radon, its principal source is building materials.

The principal sources of man-made or artificial radiation to which the Irish population is exposed are as follows:

Many procedures carried out routinely in medical diagnosis involve exposure to radiation. On average, a person receives 546 μSv per year from medical procedures. This average value does not include doses from medical treatment such as radiotherapy, which will normally be several hundred times higher.

Some people receive no dose from medical procedures while others receive much higher doses. The total dose received depends on the number and type of procedures. Some well-known procedures and the typical doses received are: dental X-ray (10 μSv); chest X-ray (20 μSv); mammography to identify breast cancer (500 μSv); CT scan (5400 μSv); angiocardiogram to determine heart function (6000 μSv).

All medical exposures to radiation must be clinically justified and should only be carried out if recommended by a GP or medical consultant.

If you work with radiation in the medical, industrial or education/research fields, on average you receive a dose of 20 μSv per year. Air crew who fly above 8000 m receive an average dose each year of 2326 μSv. As mentioned above, the average contribution from radon in indoor workplaces is 180 μSv. If you work with radiation or are air crew, your employer is required by law to keep a record of your doses.

Strict rules and regulations are in place to protect workers from accidental exposure to harmful levels of radiation.Through a system of licensing and inspection, the EPA Office of Radiological Protection regulates all possession and use of irradiating apparatus and radioactive materials to minimise the risks associated with ionising radiation.

Employers licensed to use radioactive sources must at all times comply with the conditions of their license. Workers should be familiar with, and follow the safety procedures, as set out in the Radiation Safety Manual of their company or organisation.

What are the effects of radiation?

The risk to health associated with radiation depends a lot on the dose received. At the low doses that most of us might expect to encounter, the risk is very low. The very nature of radiation means, though, that there are very few occasions when the risk level can be said to be zero.

The International Commission on Radiological Protection (ICRP) set values of maximum exposure to radiation. The largest dose limit is 1mSv (milli-Sievert) plus the natural background, which can be 4.1mSv.

Larger doses of radiation (greater than 1,500 mSv) would result in serious health effects and death, but only nuclear war or a major accident at a UK nuclear facility would expose Irish people to such doses.