The Meath Harp School was set up under the auspices of the Harp Festival to provide expert tuition to harp students. Dearbhail Finnegan teaches the harp and has brought students to a high level of competency.

The Meath Harp School was set up under the auspices of the Harp Festival to provide expert tuition to harp students. Dearbhail Finnegan teaches the harp and has brought students to a high level of competency.

In addition to the harp competitions, instrumental workshops, lectures and concerts the festival organisers and visitors enjoy the annual ceile

In addition to the harp competitions, instrumental workshops, lectures and concerts the festival organisers and visitors enjoy the annual ceile

At the sixth O Carolan festival in 1993 the Chieftains made a return visit. Tony Finnegan said "If O Carolan has left us a rich bardic heritage he could hardly be more pleased with our greatest present day exponents of traditional music -The Chieftains".

Tribute was paid to the Meath Harp School by harpist Aibhlin McCrann: "Listening to young harpers today it is obvious that they have achieved unprecedented standards of performing skills and technical expertise. The Meath harp school, brainchild of Tony Finnegan, is one of the best examples of this trend and is surely a fitting tribute to the memory of Turlough O Carolan."

In 1994 the RTE programme Ceili House was broadcast from Nobber. Maire Ni Chathasaigh and Chris Newman performed in concert.

The instrumental workshops and harp competitions took place as did the Festival Ceili and Seamus MacGabhann lectured on O Carolan and his time.

The orchestra played both well and lesser known works by O Carolan. Janet Harbison's own composition in honour of Derek Bell "Carillon" was also played.

Seamus MacGabhann spoke of the poets of pre-famine Meath. He described their life experiences and inspirations and quoted from the works of Peter Coalrake of Nobber, William Kearns of Oristown, Peter Daly of Carnaross, Michael Clarke of Whitewood, Hugh MacDonnelll of Drumconrath, and Peter Gallegan of Kilmainhamwood. 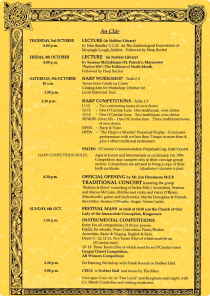 At the ninth annual Festival in 1996 the group "Buttons and Bows" performed in concert. The group had performed in America, Canada and throughout Europe and were welcome visitors in Nobber. The annual lecture was on the folklore of North Meath and was again delivered by Maynooth Professor Seamus MacGabhann.

In 1997 the Festival committee were delighted to welcome again the Belfast Harp Orchestra. That year's concert was an extravaganza of Ireland's and particularly Ulster's musical heritage in a "new Irish" medium, full of energy and colour. The mix of Irish harps with Lambeg drums, Scottish bagpipes, flutes, fiddles, solo and set dancing was dramatic. The orchestra performed also Janet Harbison's acclaimed Columban Suite, a commemoration of Saint Columba or Colmcille composed for the 1400th anniversary of the saint's death. The Saint Killian church choir from Mullagh, Co. Cavan sang.

Two lectures were delivered. One from Seamus MacGabhann called " A People's Art" detailed the great songs of Meath and Oriel. A second lecture delivered by Danny Cusack on the famine in Meath recalled "Black '47" the harshest year of the famine on its 150th anniversary.

The Programme of Events for the 1993 Harp Festival lists the instrumental workshops, harp competitions, lectures and special events that were arranged for that year. The Chieftains appeared in concert. The Festival ran from the 30th of September to the 4th of October 1993.

The programme of events for the 1994 festival lists all the competitions for harp and other instruments, the music workshops, lectures and events that took place for the 1994 Harp and Cultural Festival. The festival was on from 29th September to 2nd October in 1994.

The programme of events for the 1995 O Carolan Harp and Cultural Festival lists all the happenings for that year's festival. Harp competitions, the harp school, instrumental workshops, lectures and public entertainment all took place and the festival ran from 28th September to the 1st of October in 1995.

The programme of events for the 1997 harp, cultural and heritage festival details the lectures, workshops, competitions and concert events for that year. The festival ran from the 2nd to the 5th of October.