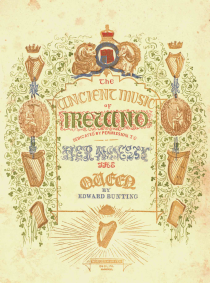 Edward Bunting (1773-1843) was a passionate collector of Irish music. He is famous for his transcription of the music of the last of the Old Irish harpers at the Belfast Harpers’ Meeting in 1792. Bunting wrote down the music as the harpists played, and later adjusted it make it suitable for playing on the pianoforte.