Surenne: The Songs of Ireland 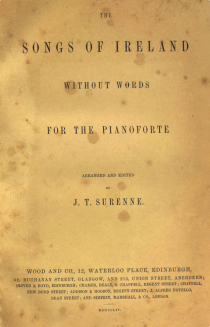 John Thomas Surenne (1814-1878) presents in this volume a collection of 223 Irish melodies that have been arranged solely for the pianoforte. Surenne has added an appendix to the volume, which includes a second version of some of the airs. The index provides a list of all the music included in the volume, and indicates when airs are known by different names.

An introduction to the collection is provided by Surenne, in which he gives an overview of the history of printed collections of Irish airs. He also gives a commentary on these earlier volumes, referring mainly to Edward Bunting’s Ancient Melodies of Ireland (1840) and discusses Bunting’s own history of Irish music. Surenne believes that the originality of the ancient Irish airs was destroyed due to alterations made by different arrangers. He gives considerable attention to the history of the harp, the development of ancient Irish music, and comments on its harmony and tonality.
Together with Thomas Constable, Surenne also published The Songs of Scotland Without Words for the Pianoforte (1852).