Morrigan and the Bull 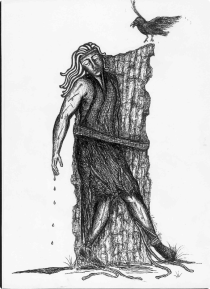 Sketch shows the moment confirming the death of Cuchulainn. The stone in the background is located in on the Dundalk side of the village of Knockbridge.

Sketch shows the moment confirming the death of Cuchulainn. The stone in the background is located in on the Dundalk side of the village of Knockbridge.

The goddess Morrigan, in the shape of a black bird, flew over Temair Chuailnge until she espied the Brown Bull. Landing on a standing stone she spoke to the Bull, telling him of the soldiers in the fields and the impending slaughter.

Upon hearing these words the Bull swung around and splintered the stone with his haunch, but the bird had already risen to the sky. The Bull took himself to Sliab Cuilinn with all speed, taking along with him his fifty heifers and his herdsman Fogaimen, who ever accompanied him. With such a single purpose he did not realise he threw off and killed one hundred of the one hundred fifty boys who always played on his back. He did not notice that he ploughed up a trench through the land of Marcéni in Cuailnge.

From the black and murky waters from Saili Imdorchi at Conaille, until the host reached Sliab Cuinciu on the edge of Cuailnge, Cúchulainn killed no-one. Remembering his vow to hurl a stone at every glimpse of Medb, he bided his time. Medb, however, had protection, for at this time she never went anywhere without half her army about her with their shields raised over her head. One of her maidservants, Lochu by name, took off one morning to fetch water, herself surrounded by an accompaniment of women. Mistaking her for Medb, Cúchulainn slung two stones and killed her in the place known now as Réid Locha, Lochu's level ground, in Cuailnge.

It is said that at Finnabair in Cuailnge the host split into two parts and foraged about them, proceeding with fire to lay waste and devastation to the land, taking all the women and children and cattle back with them to Medb's camp at Finnabair. 'Where is the Bull? You have not done anything to get me that Bull!" Medb exclaimed, to which they replied that there was no sign of the animal anywhere.

She called to her tent Lothár, one of her most experienced herdsmen, and asked him to tell her where the creature might be. 'I have heard it said that on the night that the Ulsterman were laid low with the Pangs he left with his heifers and is now most likely in Dubchoire, the Black Cauldron, in Glenn Gat of the Osiers.' 'Prepare yourselves, for you will take yourself and men with you to that place,' she ordered.

They took with them a shackle of osiers for each pair of men and went to the Valley of Osiers and found the Bull. A group of men circled the Bull and drove him towards where Lothár waited outside Finnabair. When the Bull saw him he attacked him and tore out his entrails with his horns, and then attacked the encampment with his heifers and laid low to everything, killing fifty warriors before vanishing over the hills.

After they had regrouped Medb called another herdsman to her and asked where the Bull might have gone. 'Most likely back to Sliab Cuilinn, queen, he replied, and she ordered that men go there immediately and take the Bull. When they got to Sliab Cuilinn, razing the land as they went, there was no sign of the Bull.

It is also said that at this point that the river Cronn burst its banks that night and rose up a gainst them, forcing the men to climb the trees and remain there the night until the water receded to its previous course, but raging this time like a torrent. Medb ordered her men to cross the river, and many tried but failed. The giant Ualu tried to cross with a huge flagstone raised to his shoulder so the flow of water wouldn't force him backwards. Midway across the water rose and engulfed him, stone and all, and he drowned. The stone now marks his grave at the waters edge and is called Lia Ualonn, Lia's Flagstone.

Close to this place they met with Cúchulainn, who renewed his slaughter by killing Cronn and Camdele, and more than a hundred others, including Roan and Roae, the two chroniclers of the Táin. People say that this is why the story of the Táin was lost for so long.

The host went upriver along the Cronn until they reached its source, and they were passing between the spring and the cliff face when Medb recalled them.

'I will not edge through a gap like a mouse. As an insult to all Ulster I will cross over the mountain directly. Tear up the earth and build me a gap,' she demanded. The warriors dropped weapons and picked up spades and picks to do as she ordered, and it took them three days to form the gap, which is called Bernas Bó Cuailnge.

They passed over the gap with all their belongings as well as all their spoil, and settled for the night in Glenn Dáilimda, at a place now called Botha. The following morning took them to the river Colptha. As before, when they tried crossing the river rose up against them and swept one hundred charioteers out to sea. The place of their death is now known as Cluain Carpat, the Chariot Meadow. Once again they were forced to divert and follow the river to its source, but this time Medb did not choose to dishonour the men of Ulster, passing straight on to a place by Liasa Liac, named so because the army built stone shelters there for the cattle. Then they went to Glenn Gatlach, but the river there too rose against them. Eventually they settled for a time at Druim Féne.

This part of the tale is one version of events which occurred to the host as it sought the Brown Bull of Cuailnge.

Previous - Cúchulainn's Pledge
Back to