An Táin Bó Cuailgne, or The Cattle Raid of Cooley in English, is one of Ireland's best known mythological tales. Featuring one of the great heroes of Irish mythology, Cúchulainn, the tale recalls a large-scale cattle raid in Cooley, North County Louth. It originated when Maeve, Queen of Connacht, compared her possessions to those of her husband Ailill. They discovered that their riches were equal save for a bull belonging to Ailill. To match her husband's collection, Maeve, upon hearing of the Brown Bull of Cooley, sent forth her army to capture it. 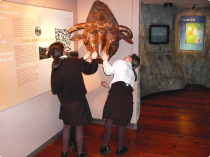 The legacy of this tale lives on in County Louth, providing the inspiration for a variety of public statues and placenames throughout the entire area. A brief commentary on aspects of the Táin and its place in Irish history has been collected by the County Library and the County Museum, Dundalk, as well as a brief version of the story in both Irish and English. These commentaries were collected from an esteemed local historian Pat O'Neill, and appear below. To supplement this, images from the towns of Ardee (where Cuchulainn fought his friend Ferdia), Knockbridge (where Cuchulainn ultimately succumbed to his injuries) and Dundalk may also be see below.

In the following pages is an account of the first part of the Táin epic, from Medb and Ailill's original argument to when the Connacht army, depleted by Cúchulainn, finally arrives at Cuailnge - only to find the Brown Bull is missing.

Story telling was always prevalent in Ireland from ancient times. All the stories can be divided into four groups:

The manuscripts in which these stories are now compiled were produced in the monasteries of Ireland in the 12th century, but the origins of the stories themselves are far more ancient. It was an oral tradition: it received a literary shape, with traces of Christianity thrown in, at the hands of the monastic scribes.

The stories tell of the weapons, boastfulness and the courage of the warriors and some of their amazing deeds. There are elements in the Táin, or the Cattle Raid of Cooley, which are lacking from the whole unit, for example: the motive for the raid; why the Ulster warriors were sick; why was Fergus with the Connaught army? These are told in príomh scéalta or pre-tales.

A strong element in the sagas is their directness in bodily matters: how Conor and Cúchulainn were begotten; the picking of vermin; and the pangs of Usna. Of course, there are lovely stories, like the sons of Usna and Fergus Mac (Roy), and the stories of the sons of Usna in exile and their return to Eamhain Macha. But there is humanity in the story as in the courtship of Emer and when Cúchulainn killed his own son (Cúchulainn said that if he had five years with him, he would have captured all Tyrone). Then we come to the story of the two bee keepers who were friends and tell how the two bulls were begotten, and the story of Maebh and her husband Ailill counting up their possessions, which gives the original reason for the raid on brown bull of Cooley.

Fionn Bánach, the white bull, was in Connaught with Maebh, and the brown bull was with Dara in Cooley. The Táin begins with the gathering of the army of the men of Eireann, Fidelma, the woman poet of Connaught, telling of her vision. The story then continues as they meander across the country and into Cooley. On their return journey, the story takes in the death of the bull on the plains of Cooley, at Loch an Tarbh; the killing of Cu Chulainn at the standing stone, or cloch an fear mór; how he killed the otter as he came out of the lake (that lake has been called Loch an Claibh ever since); how the armies would not approach him until they knew he was dead. When the raven landed on his shoulder, they knew that he was really dead and then they approached him.

Taken by Brian Walsh this photo is of a piece of public sculpture located in the town of Ardee.

Roadsign indicates location of Cuchulainn's stone. The ogham stone is reputedly the point where Cuchulainn died.

View of Cuchulainn's stone from roadside. The stone is located at Knockbridge, Co. Louth.

This photo indicates the continued consciousness of the Tain story in County Louth. Dundalk's newest bridge named after one of Irish mythology's greatest sagas.

This project would not have been possible was it not for the contributions of the following:

For more information about the local studies collection at either the Library or Museum, please contact:

Next - The Táin translated by Thomas Kinsella