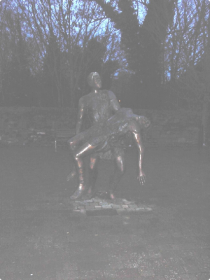 Photo of statue of Cuchulainn and Ferdia in Ardee, Co. Louth. The statue displays Cuchlainn carrying the body of his best friend and foster-brother, Ferdia, whom he has just killed in battle.

Photo of statue of Cuchulainn and Ferdia in Ardee, Co. Louth. The statue displays Cuchlainn carrying the body of his best friend and foster-brother, Ferdia, whom he has just killed in battle.

Maeve sent her soldiers around Ireland looking for an equal or better bull than the Fionn Bánacht, and lo and behold, there was one in the peninsula of Cooley, in the shaded valley among the mountains. She left Cruachán with her army although her poetess, Fidelma, had warned her of the consequences, but as she was very headstrong she went on without taking heed of all the warnings. She and her army travelled from Cruachán across Westmeath and Meath and onto Louth through Ardee and on down to Knockbridge, and she crossed into Cooley at (Alan), which was actually out in the bay and until this day can be crossed at low tide by a man walking.

When Maeve's army got into Cooley they eventually located the bull. Dara, the owner of the bull, was willing to sell it and delighted to sell it to the queen, but on hearing the soldiers saying that it was well for him, he refused point blank and hid the bull. Eventually, after much searching, the bull was located and taken back to Connacht. On the way backwards and forwards the fighting continued in a series of skirmishes. At one place, between Dundalk and Knockbridge on high ground, is still known as An (Breisleach) Mór, the area of the great slaughter, where all the battles took place and the original name for Knockbridge was 'the fort between the two burial grounds' as there were so many killed on both sides. Most of the killing was done, of course, by Cúchulainn.

When Maebh and her army eventually got to the Shannon, the two bulls fought with each other all across roughly the same route as the journey had taken, 'til eventually the brown bull of Cooley killed the white bull of Connacht in Co. Louth and that ends the saga.

Previous - The Táin translated by Thomas Kinsella
Next - Medb and Ailill