In recent years the threat of climate change has become increasingly evident posing a major impacts to humanity as well as the environment around us. Climate change can be described as a significant change to the average global and regional weather patterns that have been experienced over long periods of time. These changes can include changes in temperature, rainfall patterns and extreme weather events such as increases in powerful storms etc.

While the earth's climate has always been changing, changes to the levels of greenhouse gases in the atmosphere have dramatically increased the level of global warming over the last 150 years at a much faster pace than was previously experienced.

This is because the greenhouse effect is now being driven by man-made emissions. Human activities have resulted in a 40% increase of carbon dioxide into the atmosphere since the industrial revolution. The level of global warming in the planet has not been this high in over 800, 000 years. Most of this warming has been due to our heavy use of fossil fuels. Levels of greenhouse gases such as carbon dioxide from transport, energy production, agriculture and industrial processes continue to be on the rise. The presence of these gases in the atmosphere further enhance the natural greenhouse effect which speeds up irreversible changes in the climate (EPA, 2019). 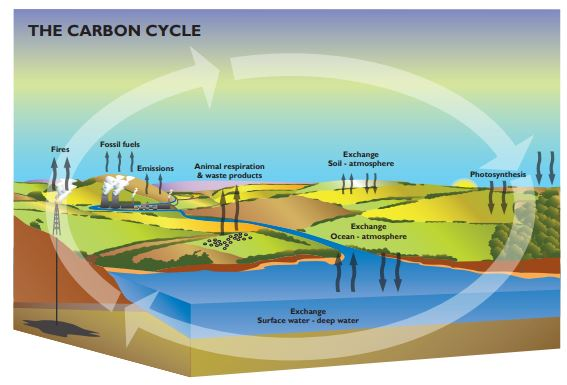 The Carbon Cycle allows carbon atoms to be reused in different ways and in different places by a process that travels carbon from the atmosphere into organisms, then the earth and then back into the atmosphere. The natural carbon cycle has been in balance over the past few hundred thousand years keeping atmospheric levels of CO2 constant. This has been the case up until recently were changes in human activities have involved increasing inputs of greenhouse gases into the atmosphere. These changes alongside detrimental land use practices, that prevent the earth's ability to absorb CO2, have upset the balance of the carbon cycle and have resulted in rise from 270  to above 400 parts per million of CO2 in the atmosphere over the last 150 years. This has exacerbated the greenhouse gas effect resulting in temperature increases of earth's surface area and its oceans. Please view Met Eireann's video on the Carbon Cycle for further details.