Pressures on the environment from urban living

Since the economy began to grow in Ireland during the 1990s, there has been a sustained movement of population from rural to urban areas. Cities and towns began to sprawl as a result of development in infrastructure, housing and industry, with growth rates exceeding those of our EU neighbours.

The type of urban development that consists of dispersed development of urban areas in low to medium density development (urban sprawl) is seen as particularly negative for the environment. Because it is difficult to serve such development with public transport, problems are created in areas such as: air and water pollution, waste management, loss of rural landscape and excessive use of fossil fuels. It can also result in damage to surrounding ecosystems and loss of biodiversity. The dramatic increase in road construction in Ireland , for example, has the effect of breaking up habitats. Wildlife, such as foxes and badgers, is now a common sight in Dublin , Cork , Belfast and many smaller towns in Ireland. 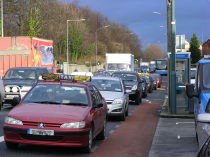 In addition, the concentration of vehicles and households in urban areas increases air pollution, and although Ireland has good air quality thanks to the Atlantic winds, we still have one of the highest per capita levels of emissions within the EU.

Industries also release chemical pollutants into the atmosphere. These pollutants are washed away by rainwater into rivers and can damage water quality as well as marine ecosystems.

One of the most prominent problems of urbanisation around the world is the ‘urban heat-island’ effect as cities tend to generate higher temperatures than rural areas. Heat gets trapped between high-rise buildings, while roads and other artificial surfaces also trap in the heat. This ‘urban heat-island’ effect has severe environmental impacts, especially on air quality, and is a major contributor to global warming and climate change.

A consistent reduction in pollution is needed in order to secure a sustainable future.

The EPA's Latest Environment Report has detailed information on things which involve the urban environment.