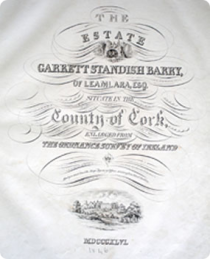 Historical Background: The material relates to the Standish Barry estate at Leamlara in east county Cork. This estate was untypical insofar as the family was Roman Catholic. Their surname was Barry; the Standish Barry name was applied principally to distinguish them from other branches of the Barry family in the area.

Collection Details:  The collection is comprised of:-

Next - History of Leamlara House