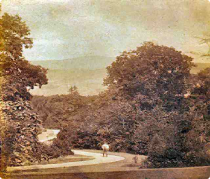 Woodstock Estate owes its existence to the land speculation of Stephen Sweet of Kilkenny who in 1703 purchased the townlands of Inistioge, Kilcross, Killeen and Ballyshane, from the financially embarrassed James Butler, second Duke of Ormonde.

The lands that formed the Woodstock Estate amounted to 21,763 statute acres dispersed over six counties, prior to the Land Acts. Stephen Sweet died in 1725 having designated as his heir, his grandson, William Fownes.