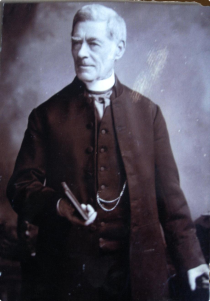 A beautiful portrait of a great priest and author, the Very Rev. John Canon O'Hanlon, who was born in Stradbally in 1821 and died in 1905.

A beautiful portrait of a great priest and author, the Very Rev. John Canon O'Hanlon, who was born in Stradbally in 1821 and died in 1905. 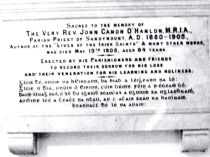 This plaque was erected to the memory of the Very Rev. John Canon O'Hanlon, Parish Priest of Sandymount, by his Parishioners and friends to record their sorrow for his loss.

This plaque was erected to the memory of the Very Rev. John Canon O'Hanlon, Parish Priest of Sandymount, by his Parishioners and friends to record their sorrow for his loss.

The Very Rev. John Canon O'Hanlon was born in Stradbally in 1821. At the age of thirteen he went to study at the Preston School in Ballyroan specialising in Latin and Greek, and six years later he entered Carlow College to study for the priesthood. His stay in Carlow lasted only a year as the family emigrated to America and settled in Millbrook, near St. Louis, in Northeast Missouri. He was admitted to the diocesan college in St. Louis and ordained in 1847.


John O'Hanlon ministered in the St. Louis area until 1853 when he returned to his native Stradbally due to ill health. A year later, his health having improved, he offered his services to the Archdiocese of Dublin. In 1880 he was appointed Parish Priest of Sandymount and Ringsend, and ministered at St. Mary's Star of the Sea, Sandymount until his death in 1905. A Commemorative plaque is on display in the Star of the Sea church in memory of Canon O'Hanlon.

During his fifty years ministering in the Dublin Archdiocese he wrote many works of historical and religious content. He laboured for many years on his Magnum Opus; "The Lives of the Irish Saints" - which is a month by month sequence of the feasts of the Irish Saints as they were recorded in the ancient martyrologies.

He is remembered in his native County for his two-volume "History of the Queen's County," which covers the history of Laois from earliest times to the end of the nineteenth century. He is also remembered for his poems, particularly his "Land of Leix," his collecting of the "Legends and Poems" of John Keegan of Shanahoe, and the many articles he wrote on the "Old Churches of Leix" in the Irish Builder from 1881 - 1888.

Rev. E. O'Leary, writing Canon O'Hanlon's obituary in the Kildare Archaeological Journal of 1905, describes him as a "simple, genial, saintly priest, with a warm heart that never forgot a kindness." A portrait of John Canon O'Hanlon was formally donated by Mr. P.J. Mulhall of Abbeyleix to Laois County Council Chairman, Mr. Martin Rohan M.C.C., at County Hall on 12th December 1990. John O'Hanlon stayed with the Mulhall family of Pass, Ballyroan while attending the Preston School between 1834 and 1840. It was through this connection that the Portrait came into the Mulhall/Morrissey family, where it had been for many years. Courtesy of the Mulhall family, this beautiful portrait is now the property of Laois County Library.