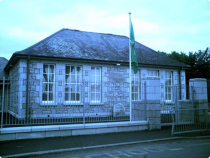 This Irish school passed all the requirements to become a 'Green School.'

This Irish school passed all the requirements to become a 'Green School.'

Leading the charge to make schools greener is the Green-Schools international environmental education programme and award scheme, run in Ireland by An Taisce. In Ireland, Green-Schools is operated in partnership with Local Authorities and has been a fully national programme since 2001. Internationally it is known as 'Eco-schools'.

The award part of the scheme comes in the form of a green flag - a now well respected and recognised eco-label. Usually if a school reaches this target, it displays the flag outside the school or in the foyer. To keep the school striving to reduce its environmental impact the green flag award requires renewal every two years.

There are seven steps to Green-School success:

Results of the scheme so far

Research in 2001 showed that those schools awarded with green flags, on average, took 45% of their waste away from landfill. A number of those schools were close to achieving no waste at all, with some producing as little as two grams of waste per person per day.

Most recently the programme is said to have saved Irish schools €2 million in waste costs per year, which includes: 3.7 million units of electricity; 200 million litres of drinking water; and around 500,000 litres of transport fuel. In total, twelve tonnes of waste has been diverted from landfills in Ireland every school day by schools undertaking the programme.