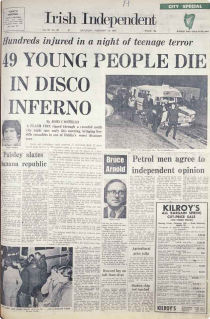 The decade of the 1980s was dominated politically by Ronald Reagan in the United States and Mikhail Gorbachev in the Soviet Union. The Falklands War took place in 1982 between Great Britain and Argentina. The defining event of the decade was the collapse of the Soviet Union and of Communist rule in Eastern Europe. In 1989 thousands were killed in Tienanmen Square in Beijing, China, as students protested. The Iranian Revolution saw the start of Islamic Fundamentalism as a political force. It was a decade of economic boom in the United States and much of Western Europe. The late 1980s saw the Apartheid system in South Africa dismantled after decades of international pressure.

The economic boom did not reach Ireland, and the 1980s was a decade of recession, unemployment and emigration. The troubles continued in the North of Ireland, with the Hunger Strikes causing severe unrest through 1981.

1981 (14 Feb) 48 die and nearly 200 injured in a fire at the Stardust Ballroom in Artane, Dublin. The investigation which followed led to major changes in fire safety legislation.

1990 The Ireland soccer team qualifies for Italia 90, the World Cup held in Italy.