There were probably no more than 10,000 landlords in Ireland at the beginning of the nineteenth century out of a total population of 5.4 million people. The vast majority of these landlords were Protestants. The tenants who rented their holdings from landlords were mainly Catholics (at least outside the northeast counties of Ulster.)

Most of these tenants were tenants-at-will. Others held leases. All of them paid rents either directly to the landlords, or to middlemen, who rented large tracts of land from landlords and then sublet them to a mass of smaller tenants.

The landlords who had sold their estates under the 1903 Land Act had received huge sums of money for them. For example, Lord Clonbrock received Ł250,000 (probably around Ł12.5 million in today's terms.) He invested it in stocks and shares throughout the world. With their new investments, many more landlords might have survived with their houses intact for much longer. However, after the war there was a worldwide economic depression.

The value of stocks and shares plummeted, culminating in the Great Wall Street Crash of 1929, which wiped out the investments of many families. The fact that income tax, death duties and the levels of rates increased dramatically after the war also greatly accentuated decline.

Fall of the Big Houses 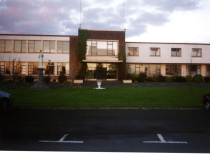 Heywood Community School was officially opened on December 5th 1995. It was built near the former grounds of Heywood House.

Heywood Community School was officially opened on December 5th 1995. It was built near the former grounds of Heywood House.

The loss of their landed estates, and later their investment portfolios, meant that the bulk of Irish landed families could no longer afford to hold on to their big houses.

Today, probably less than 100 original landed families still own their Irish big houses. Many more houses have since disappeared completely from the landscape, having been burned or simply demolished. Others survive in a different guise having been turned into hotels, leisure centres, hospitals, prisons and so on.

Michael Frederick Trench built Heywood house in the eighteenth century with the help of the well-known architect, James Gandon.