Early History of the Estate and the Tisdall Family 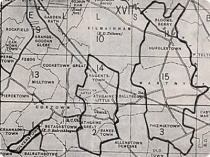 The Tisdall family first settled in Castleblayney in Co. Monaghan from either Scotland or England in the 1620's. Some forty years later, in March 1668, Michael Tisdall leased the Manor of Martry in Co. Meath from Nicholas Darcy. The Darcys had been dispossessed of their lands following the 1641 rebellion, but had been partially restored to them in 1666.

The manor comprised 120 houses, a pigeon house, two windmills, and 1,900 acres of land in pasture, meadow, woodland, heath and moor spread over 9 townlands. In 1672 Michael bought the Manor. His residence was on the bank of the Blackwater river. The townland was called Jakestowne in the Civil Survey of 1654-1656 and was later called Bloomsbury, but he renamed it Mount Tisdall . Michael died in 1681 aged 44 years.


His 13-year-old son, William, inherited the estate, administered for him until his coming of age by his uncle, James Tisdall. In 1691 William married Frances Fitzgerald, sister of the 19th Earl of Kildare. Their eldest son, Michael, came of age in 1714. The previous year he became M.P for Ardee, replacing his retiring uncle, James, who had first been elected in 1695. In 1719 Michael married Catherine Palmer, whose father, William, was M.P. for Kildare in 1695 and for Castlebar in 1723.

Michael and Catherine's son, Charles, was born in October 1719 and later their daughter, Catherine. Michael died in 1726 when he was aged 33 and his son Charles was just 7 years old. In the period 1726 to Charles' coming of age in 1740, the estate was managed by his father's executors, Charles Hamilton of Dunboyne and William Waller of Allenstown, and by his uncle the Reverend George Tisdall. His mother subsequently married the Reverend Doctor Edward Hudson and she and her daughter, Catherine, were provided for under the terms of Michael's will, receiving Ł70 and Ł60 per annum respectively. Charles also paid Dr Hudson Ł40 per year "for lodging and dyeting my sister."

Charles attended Trinity College , Dublin and graduated in 1738 with a B.A. degree. In 1740 he assumed control of the estate.

Next - Charles Tisdall and the Construction of Charlesfort House