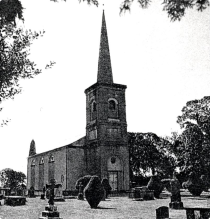 Coolbanagher Church is a late-eighteenth century church of St. John the Evangelist. It was built by the famous architect James Gandon.

Coolbanagher Church is a late-eighteenth century church of St. John the Evangelist. It was built by the famous architect James Gandon.

The late-eighteenth century church of St. John the Evangelist, Coolbanagher, is the only church built by Gandon. A cared for church, it has a Dawson mausoleum by Gandon, and houses the original plans; it has a fifteenth century font, and urns designed by Gandon, but which were only recently moulded and inserted.


Skirting the grounds of Shaen Castle are the ruins of Coolbanagher's monastic settlement, immortalised by its association with Oengus the Celí Dé.

As he travelled along the Slíge Dála from Clonenagh on his way to Tallaght - at the end of the eight century - he visited Coolbanagher. In the churchyard he had a vision of angels hovering over a freshly-made grave of a man who had venerated the saints: as a result he decided to compile his Felíre or Calendar of Saints, which he completed in Tallaght, and which still survives as a major source for ancient Irish ecclesiastical history. The site is being renovated. Opposite the old Coolbanagher Church is a Hartpole tower house.

Artist's impression of the 8th century church visited by Oengus the Ceilí Dé.