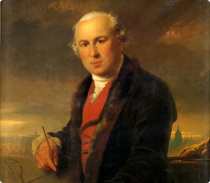 Mr. James Gandon was one of Ireland's leading architects in the 18th century, and Emo Court is an example of Gandon's immense architectural genius.

Mr. James Gandon was one of Ireland's leading architects in the 18th century, and Emo Court is an example of Gandon's immense architectural genius.

Mr. James Gandon (1742 – 1823) is strongly associated with Emo as a result of his design of Emo Court. One of his other designs was the Four Courts. This building was started in 1776 by Cooley - the architect of City Hall in Dublin. He died in 1784 and Gandon became the architect. He recast the design. This was Gandon's second riverside building. Compared with the Custom House, it was more massive and robust rather than delicate but lacking neither grace nor refinement. Like the Custom House, he met opposition here also. The foundation stone was laid by the Lord Lieutenant, the Duke of Rutland, in 1786.

For his patron, Lord Portarlington, Gandon first built Coolbanagher Church. Then in 1790 he designed a large neo-classical mansion originally called Dawson Court, but he later renamed it Emo Park. It was not finished until 20 years later by Gandon's pupil, Morrison. This man was also responsible for the completion of Ballyfin House. In 1929 Emo Park was a Jesuit Noviciate. Gandon also designed the Georgian Inn. Another of his works was the Courthouse in Waterford – built from a design he originally did for a Courthouse in Nottingham.

This was at the request of the Marquis of Waterford, brother of Beresford. He also designed some private houses including Emsworth in Malahide, still a private residence; also Canonbrook in Lucan where he lived. We in Ireland are greatly indebted to this great man who gave more than half his life in the service of our country and left us such wonderful architectural treasures.