Landed estates were generally the holdings of families (usually of Anglo-Irish and English extraction) who received or inherited grants of lands originally confiscated by the British Crown in about the 17th century. The size of the landed estate varied from small local affairs with hundreds of acres (essentially large farms) to thousands of acres of land over a county or province. 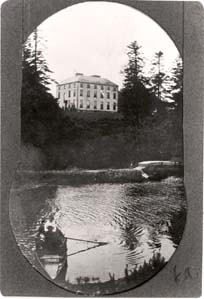 Estate land was held in freehold or outright ownership by the landlord and then rented or leased in small and large parcels to tenants. Many tenants were also landlords, subletting to smaller landholders. Frequently a tenant would hold a lease for 21 years or for 3 lives mentioned on a lease, and while less secure year-on-year and even unwritten arrangements were not uncommon, on the other hand longer leases of 99 or even 999 years were sometimes made to tenants. It was common, particularly where the landlord resided elsewhere, for a land agent to be appointed by the landlord to carry out the day to day management of the estate, and this would have entailed the setting of rents and the collection of rents and arrears, and ensuring that tenants carried out the stipulations made in their leases such as the growing of certain crops, the planting of trees or other improvements. The distrainment of the goods of a tenant (in lieu of rent) or the eviction of tenants for non-payment of rent were not altogether uncommon in certain periods.

The landed estate was the centre of the rural economy in Ireland and the close relationship between landlord and tenant was the basis of the land system. The landlord was more than just a collector of rent, he was also expected to fulfil certain patrician duties such as the providing of relief and employment in bad times. The tenant was in return expected to pay the rent and to make improvements to the land or agricultural practices. It may be argued that this kind of relationship was prone to friction when the economic or political climate was unfavourable to tenants' well-being.

The mid-late 18th century to the mid 19th century was the heyday of the landed estate. Many 'Big Houses', the residences of landlord families, were built in the period from about 1720 to 1840, the typical Big House being a large three storey mansion, with a garden and demesne. Many of these houses are today a significant part of Ireland's heritage. The Big House was a physical representation of the status and role of the landlord within local and sometimes national affairs. Like much of the rest of Europe in this period, in Ireland land was the main source of political power, social prestige and economic development. The landlords were the 'backbone' of the political elite in Ireland until national independence.

The Big House was usually surrounded by extensive grounds and gardens and was the headquarters of the landed estate. It was an important source of local employment, requiring a sizeable household staff such as housemaids, footmen, a butler, governess' and labourers. The demesne was usually the household farm which was worked by labourers from the local district, and the demesne farm was often a model farm which introduced to the locality some of the latest agricultural and land management techniques and technologies.

In the Big House the family often lived in relative opulence when compared to the tenants, although there were many smaller and poorer landlords no more prosperous than a large tenant farmer. Landlord life usually revolved around the management of the estate, the local hunt, and social gatherings organised within the Big House. Many landlords would have served the State as local Magistrates and Justices of the Peace, on the county Grand Jury (a pre-cursor of the modern County Councils) and perhaps on the local Poor Law Union Board of Guardians. Some larger landlords served as MP's, Peers, and in senior civil or military State positions. Marriage often took place in a semi-arranged manner, sometimes with local families of similar status marrying into each other over various generations. Marriage was often a means to improve or preserve the social and financial standing of a family.

Reform of the Land System

By the mid-nineteenth century, most of Ireland was in the hands of about 8,000 to 10,000 landowners, mainly of a Protestant religious denomination and perhaps less than 1000 of these owned in total more than 50% of the land.

The Great Famine of 1845-48 had catastrophic effects on the rural population in many areas, and many landed estates struggled to cope with the effects of widespread starvation and death amongst smaller tenants and labourers as well as with the attendant decline in rents. By the 1850's, the rapid decrease in population due to death and emigration had facilitated a move towards the joining together (consolidation) of small holdings and a more professional approach to estate and land management.

After the Famine were the passing of the Encumbered Estates Acts. Many estates were massively encumbered with debts due to the cost of maintaining the Big House and the attendant lifestyle, and due to expensive banking arrangements, marriage settlements and financial arrangements for the upkeep of members of the family. The Landed Estates Court allowed creditors of bankrupt estates to have the estate sold so as to receive payment.

In the late nineteenth century, amid widespread economic depression and the agitation of the 'Land War', and the political context of the Home Rule movement, there were moves for the reform of the land system in the form of the various Land Acts. The 1881 Land Act, for example, altered the landlord-tenant relationship by giving many tenants more rights and fairer rents. The 1882 Arrears Act wiped out many tenants' arrears.

Agricultural depression and political agitation had helped to undermine the value of the land and of produce. The landlords' chief source of income was rent, but rents were declining. The declining income from rents made interest payments on debts difficult to meet. In the face of mounting debt and increasing hostility towards them, landlords were often keen to sell their land. By this time also, the 'middleman' or tenant landlord, had almost completely vanished.

In 1885 came the passing of the first of the Land Purchase Acts. These Acts eventually dissolved the landlord-tenant relationship. The 1903 (Wyndham) Land Act, for instance, advanced purchase money to tenants and gave a 12% bonus to landlords for selling their whole estate. Landlords were then able to pay their debts, while tenants could secure loans to purchase their farms, the annuities (repayment instalments) of which were lower than their old rents. By 1914, about 80% of tenants had purchased their holdings. Many landlords sought new income from investments in stocks and shares but many left the country having sold their estates.

This article does not claim to be definitive and is intended to provide some general background information about the landed estate in Ireland.