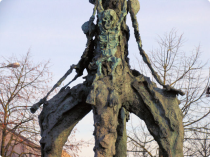 Detail showing skeletons from the Liberty Tree Sculpture by John Behan, the Dublin born sculptor. This was a Bicentenary Initiative for the 1798 Rebellion.

Detail showing skeletons from the Liberty Tree Sculpture by John Behan, the Dublin born sculptor. This was a Bicentenary Initiative for the 1798 Rebellion.

Celebrations in commemoration of the 1798 Rebellion were held in towns and villages around County Carlow in the Bicentenary year. Monuments were unveiled and commemorative booklets were launched in a lasting tribute to those who had lost their lives. The timeline of some of the principal events and initiatives listed below indicates the depth of interest demonstrated by the people of County Carlow in this period of history.

03/05/1998 Unveiling of the '98 monument in Market Square, Muinebheag. An Ecumenical Service of Remembrance was also held.

17/05/1998 Pageant and parade in the village of Clonegal on the Carlow-Wexford-Wicklow border. A monument was unveiled to the memory of Michael Connors and Myles Doyle. A booklet on Clonegal in 1798 was also published in the Bicentenary year.

20/05/1998 A plaque was unveiled at Ballinkillen Cemetery near Muinebheag in memory of Teresa Malone, heroine of '98.

22/05/1998 Commemorative walk over 52 miles at Tomduff one of the areas associated with Fr. John Murphy.

24/05/1998 The Annual Parade to the Croppy Grave in Graiguecullen took place. The Army Band, F.C.A.took part in this ceremony.

26/05/1998 Hacketstown village commemoration day on which the '98 monument was rededicated and a launch of the book "One Hundred Years too Soon, Hacketstown and 1798" by Robert Duffy.

13/06/1998 The Liberty Tree sculpture was unveiled in Potato Market, Carlow.

28/06/1998 Kilcumney (near Borris) was the site of Fr. Murphy's encampment on his way home to Wexford on the 25th of June 1798. A memorial and plaque were unveiled here during the Bicentenary year.

02/07/1998 Bicentenary of the execution of Fr. John Murphy and James Gallagher commemorated as new memorial was unveiled at Castlemore followed by a walk to the Mullawn Graveyard in Tullow where another plaque was unveiled.

05/07/1998 The principal '98 Bicentennary celebration for the Tullow area was held at the Square in Tullow where there is a monument to Fr. John Murphy.

05/07/1998 Myshall village near Muinebheag held its commemoration Mass and a plaque was unveiled at Croppy Road.

19/07/1998 The '98 Commemoration was held in St. Mullins in south County Carlow. An illustrated booklet was published with detailed accounts of the significant events of the Rising in the local area.

04-06/09/1998 Bicentenary Commemoration events held in Clonmore near the border with County Wicklow.

A monument was unveiled to the memory of John Moore at Royal Oak near Muinebheag.

Previous - Bicentenary of 1798 - The Liberty Tree
Next - Sources