The Battle of Carlow

The town of Carlow was the location for a planned attack by the Rebel forces on those of the British crown in May 1798.

Early in the morning of the 25th of May the Carlow rebels assembled in great numbers. They had come from various parts of the county - from Grange and Hacketstown, from Tullow and Leighlin and from other areas too. A further contingent from the Queen's County (Laois) planned to meet with them at Graigue Bridge.

When the Rebels entered the town of Carlow they were joined not only by the Catholic inhabitants but also by people who had secretly arrived there during the previous day and night. A crowd of approximately two hundred people marched through Tullow Street but when they reached Potato Market their fortunes changed. 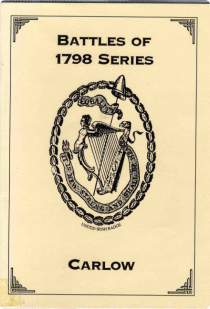 Cover of booklet entitled "The Battleof Carlwo 1798" by Art Kavanagh

Cover of booklet entitled "The Battleof Carlwo 1798" by Art Kavanagh

There the Rebels progress was impeded and they came under fire from two sentinels. The Rebels had to abandon their plan to meet with the Queen's County Rebels at Graigue Bridge. Instead they were forced to cross Potato Market towards the gaol where they were further forced to retreat through Bridewell Lane, towards the courthouse [now the Deighton Hall]. Shots were fired and they were surrounded by soldiers. They threw down their arms and tried to beat a retreat along their original route. However because the Rebels feared that they would meet the army if they proceeded in that direction they retired into houses in Tullow Street which were already occupied by their own associates. The soldiers set fire to these houses and some of the Rebels rushed outside and were immediately shot or bayoneted. Those unfortunates who remained inside were consumed by the flames. Other Rebels who had taken different routes of escape were shot by loyalists and those who initially escaped were pursued and killed by soldiers and yeomanry. The streets, roads and fields were strewn with the bodies of the fallen. The dead were borne on numerous carts to the far side of Graigue Bridge where they were buried in three gravel pits and covered with quick lime. It was said that there were over four hundred bodies buried there. Altogether it was said that a total of about six hundred people perished that day.

In the meantime the Queen's County Rebels having heard of theses events accordingly changed their route. They were led by men called Redmond and Brennan. They proceeded to Ballickmoyler, some miles outside Carlow but in the Queen's County [Laois] and there they set fire to loyalist houses and attacked the home of John Whitty, a Protestant clergyman. Twenty-one of the Rebels were killed in the fray but despite this that eventually overcame the loyalists. One of the loyalists called Richard Waters was just about to be executed when news of the Rebels' defeat at Carlow reached them. In the dismay and panic that ensued, Waters successfully persuaded them to lay down their arms and so his life was saved.