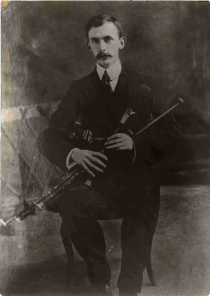 Although the words 'ancient' and 'old' were frequently employed in relation to Irish traditional music, it is not enormously old. The earliest items are harp pieces and airs connected with songs of an early date but these do not go back beyond the sixteenth century.

The earliest mention of an Irish song is contained in Shakespeare's Henry V (1599) where the character Pistol uses the expression 'callen o custure me' as a piece of gibberish. This has been shown to be a reference to the song 'CailŪn ” Cois tSiķire Mť'. The air of the song has survived from the same period.

The bulk of our repertoire was created in the last three centuries, and the hundred years leading up to the Famine is generally considered to have been a particularly fruitful period. The present is also fruitful, and new songs, tunes and dance are again being made in the style of the older material.