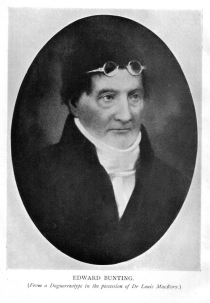 The first significant collector to work in the field of Irish music was Edward Bunting, the Belfast organist who was employed to notate the music played by the harpers at the Belfast harp festival in 1792. The music so interested him that it occupied his attention for the remainder of his life. He continued to collect music and songs for some years and he published three volumes of material drawn from his collection: General Collection of the Ancient Irish Music (1796), General Collection of the Ancient Music of Ireland (1809) and The Ancient Music of Ireland (1840). These collections were revolutionary for their time, although later commentators have faulted Bunting's approach to a form of music with which he was unfamiliar.

Several collectors continued and extended Bunting's work during the nineteenth century, with George Petrie's Ancient Music of Ireland (1855); and Patrick Weston Joyce's Ancient Irish Music (1873) and Old Irish Folk Music and Songs (1909) being the most significant.

It was from outside Ireland, however, that the first great collections of the 20th century emerged. Francis O'Neill, who had emigrated from Cork as a youth, was the Chief of Police in Chicago in the latter decades of the 19th century. A flute player himself, he is said to have used his position to provide jobs for any needy Irish musicians that he encountered. He collected tunes from among the musicians he knew in Chicago and went on to publish this material in The Music of Ireland (1903, 1850 items), The Dance Music of Ireland (1907, 1001 items) and Waifs and Strays of Gaelic Melody (1922, 365 items). These publications exceeded in their scope and usefulness anything that had appeared before, and the 1907 volume, known familiarly as "the Book", quickly became the standard reference work.

In the mid-twentieth century Breandán Breathnach, starting, like O'Neill, by collecting material for his personal use, went on to compile the largest ever collection of dance music. Five volumes of selections from this material have been published, as Ceol Rince na hÉireann I - V, the first three edited by himself and the final two after his death by Jackie Small.

O'Neill and Breathnach's focus was on instrumental music. There were also several great collections of song material during the last century. The most celebrated of these is that made by the piper Séamus Ennis under the auspices of the Irish Folklore Commission in the 1940s. Working in Gaeltacht areas and collecting only Irish-language material, he assembled a wonderful collection of some 2,000 songs. Although not as well known as Ennis's work, the collection of English-language songs made by Tom Munnelly for UCD's School of Irish, Celtic Studies, Irish Folklore & Linguistics, is equally important. His work started in 1971 and still in progress at the end of 2005, amounted by then to around 20,000 items.

Other significant work includes the tune collections of Canon Goodman and Francis Roche, the song collections of Sam Henry and Martin Freeman, and, in the field of dance, those of Connie Ryan, Pat Murphy, Larry Lynch and Eileen O'Doherty.