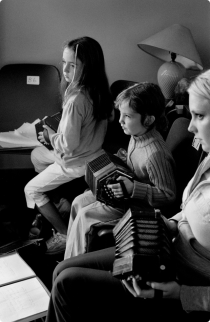 There are a small number of musical instruments associated with traditional music in Ireland, some of them of greater antiquity than others. To a great extent the music was shaped on these instruments and reflects their potentials and limitations.

The dance music, for instance, was largely created in the 18th and 19th centuries when the instruments of choice for popular music were the pipes

Johnny Doran performs some reels on the uilleann pipes. 'Colonel Frazer / My Love is in America / Rakish Paddy'

Denis Murphy (fiddle) plays a set of jigs from the CD 'Music from Sliabh Luachra'. The Humours of lisheen / The Lark in the Bog

. These, along with the flute

and whistle, and more recent introductions like the accordion

Brendan Begley (accordion) plays some slides from 'We Won't Go Home Til Morning'. The Bicycle / An Bóthar Ó Thuaidh

'The Ship in Full Sail'

It is important to realise that Irish traditional music is not simply dots on a page, but a particular sound, and that sound has been developed and shaped on these instruments.

Apart from the harp, which has never been much used for dance music, plucked-string instruments were not historically part of the Irish musician's arsenal. During the 20th century the tenor banjo attracted a following as a melody instrument and its use is now established.

Accompanying instruments were introduced- the guitar and bouzouki in particular- and have also become ubiquitous, although accompaniment is not essential to the music, and is thought by many players to obscure rather than enhance it. 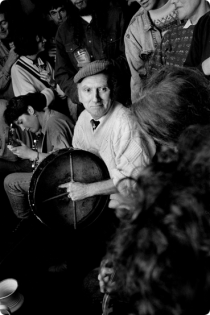 Unidentified bodhrán player at Miltown Malbay, Co. Clare. The bodhrán is a single sided drum beaten with the knuckles or with a stick. It was included in the music of Seán Ó Riada in his ensembles in the 1960s.

Unidentified bodhrán player at Miltown Malbay, Co. Clare. The bodhrán is a single sided drum beaten with the knuckles or with a stick. It was included in the music of Seán Ó Riada in his ensembles in the 1960s.

A significant development of the 1960s was the use by Seán Ó Riada in his experimental ensembles of the bodhrán (a single sided drum beaten with the knuckles or with a stick).

Percussion had never been generally used in Irish music apart from some obscure regional practices.

Ó Riada's innovation had great novelty value and proved very popular- particularly among those with no previous experience of traditional music.

In the course of half a century its use has expanded enormously, and completely new techniques of manufacturing and playing the instrument have been invented and elaborated.

Like accompaniment instruments, its use can be dispensed with without any injury to the music.