Davitt: Leaves from a Prison Diary 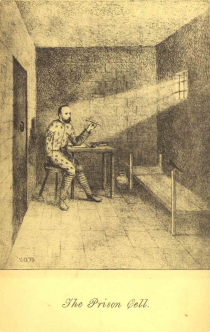 Sketch of Michael Davitt in the prison cell. Taken from Leaves from a Prison Diary, Vol. 1

Sketch of Michael Davitt in the prison cell. Taken from Leaves from a Prison Diary, Vol. 1

Michael Davitt was a labour leader, who is remembered chiefly for his work for the right of Irish tenant farmers to own their farms.

Michael Davitt, 1846 -1905, was born in Straide, County Mayo. His father was a tenant farmer who was evicted during the Great Famine, forcing the family to emigrate to Lancashire. Michael went to work at just nine years of age and lost his right arm in a factory accident in 1857 when he was 11 years old. He joined the Fenian movement and was sentenced to fifteen years penal servitude for gun running but was released after seven years. He founded the Land League, and lead the agrarian struggle of 1879 – 1882. He was sent to Portland jail in 1881 with other leaders and it was here that he wrote his Leaves from a prison diary.

Michael Davitt  shared the Irish political stage with Charles Stuart Parnell, supporting him in much of his agrarian reform work but disagreeing with him over Parnell’s emphasis of nationalism over worker’s rights.

In his later years, Michael Davitt travelled widely, lecturing, writing and supporting worker’s rights. He published The fall of feudalism in Ireland in 1904.

Previous - Collins: The Path to Freedom
Next - Devoy: Recollections Of An Irish Rebel