O'Brien: The Parnell Of Real Life 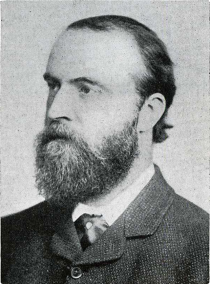 William O’Brien, a native of Mallow, Cork, wrote The Parnell Of Real Life, first published 1926, to counteract the prevailing myths about 19th century politician Charles Stuart Parnell and to present a true picture of the man he knew personally.

Charles Stuart Parnell (1846-1891) was born at Avondale, Co.Wicklow, to a family of wealthy Protestant landowners. His great grandfather had served in Grattan’s Parliament and had been against union with Britain in 1800. Parnell’s American-born mother was very anti-English and the long history of Irish rebellion also made an impression. Parnell, who was educated at Cambridge, seemed destined to be a landlord when he decided to enter politics in order to fight to alleviate the plight of Irish tenants.

He contacted Isaac Butt, leader of the Irish nationalist MPs in the House Of Commons and was elected in 1875. Parnell gathered Irish nationalist support behind him and became leader of the Land League in 1879. He succeeded Butt in 1880 as nationalist leader, creating the Irish Parliamentary Party in 1882. For the remainder of his career, Parnell campaigned for land reform and Home Rule in Ireland . In 1885, Gladstone, the leader of the Liberal Party government depended on Parnell’s support and in return agreed to support his demands.

However in 1886 the Home Rule Bill was defeated and the Liberal Party was in turn defeated by the Conservatives in a subsequent general election. Nonetheless Land Acts were passed in 1881 and 1887. Thereafter the Land League became the National League under Parnell’s leadership and continued to push for Home Rule. In 1891 news of Parnell’s relationship with divorcee Kitty O’Shea split his party and lost him Liberal support. Nonetheless Parnell continued to campaign for Home Rule but his health deteriorated and he died in 1891 aged 45.

William O’Brien (1852-1928) author of  The Parnell Of Real Life, an Irish nationalist, agitator, journalist, writer and politician, was born in Mallow, Co. Cork . O’Brien received his education at Cloyne diocesan college which strongly influenced his religious tolerance. O’Brien became involved with the Fenian Movement (he was to soon reject political violence) and later agitated on behalf of the Land League to bring about the end of landlordism and better conditions for Irish tenant farmers.

He ultimately became associated with Charles Stuart Parnell’s Irish Parliamentary Party and became editor of the United Irishmen, an important mouthpiece for Irish nationalism. He was elected as an MP repeatedly between the early 1880’s and 1918. Following the 1916 Easter Rising, O’Brien gave up his seat in 1918 believing the Irish Parliamentary Party were a spent force and joined Sinn Fein. He later opposed the Anglo-Irish Treaty in 1922, the partition of Ireland and the creation of the Irish Free State but declined an offer from Eamon De Valera to stand for election in 1927. He died suddenly in London in 1928.

Previous - Moore: Hail And Farewell
Next - O'Donoghue: The Life and Writings of James Clarence Mangan