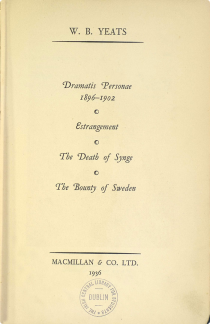 Dramatis Personae is a four part autobiographic collection written by William Butler Yeats (1867-1939) detailing incidents, events and people he met who influenced his artistic development as a poet.

Dramatis Personae is a four part autobiographic collection written by William Butler Yeats (1867-1939) detailing incidents, events and people he met who influenced his artistic development as a poet.

Dramatis Personae is a four part autobiographic collection written by William Butler Yeats (1867-1939) published 1936, detailing incidents, events and people he met who influenced his artistic development as a poet.

The first section entitled Dramatis Personae 1896-1902, describes Yeats' meetings with Lady Augusta Gregory at Coole Park, Co. Galway which eventually led to the creation of the Irish National Theatre Society and the opening of the Abbey Theatre in 1904. The playwrights associated with the Irish Literary Revival had their plays staged there including John Millington Synge.

The second section Estrangement, deals with Yeat's anxiety that his works were not accessible to their intended audience, the Irish people. Yeats came from a wealthy Anglo-Irish Protestant family but became a committed nationalist, attracted to Celtic mysticism, legends and folklore. Nonetheless he lamented that, as part of the refined Ascendency elite and an intellectual artist, he felt aloof  from the common Irish Catholic population who were largely indifferent to his work. He sought to create a more simplified artistic personae in contrast to the more complex reality of his actual life and self.

The third section The Death Of Synge, describes Yeats' association with John Millington Synge, the progeny of a wealthy Anglo-Irish Protestant family. Yeats encouraged Synge to travel to the Aran Islands to study the Irish peasants and fishermen who lived there and to use them as inspiration for his work. Synge who lived in Paris spent several summers on the islands. Synge's body of work especially The Playboy Of The Western World were faithful representations of their Hiberno-English language and roguish lifestyles. However Synge's irreverent plays violently offended Irish nationalists and the powerful Irish Catholic Church. Synge died young in 1909 aged 37, much to Yeats' regret.

In the fourth and final section, The Bounty Of Sweden, Yeats' paid tribute to Sweden for awarding him with the Nobel Peace Prize for Literature in 1923. The award was given to Yeats in the period immediately after the end of the Irish Civil War when the Irish Free State emerged as a newly independent nation. Yeats sought to use the event to establish himself as the cultural representative of Irish independence and Irish nationalism.

Previous - Wills: Lives of Illustrious and Distinguished Irishmen
Next - Life and Society