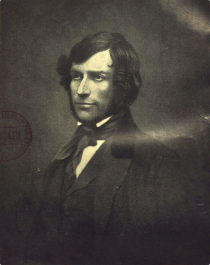 John Mitchel was born near Dungiven, Co Down, the son of a Unitarian minister.  He was educated at Trinity College , Dublin,  and practiced as a solicitor in Banbridge, County Down.

He joined the Young Ireland movement, a romantic nationalist group composed mainly of non-sectarian middle-class graduates of Trinity College.  He developed more radical views, partly influenced by the Great Famine and what he saw as England's neglect of the Irish peasantry.  He advocated a peasant-led revolution in his newly established paper, The United Irishman.

The Young Irelander’s Rebellion in 1848 was a total failure and he was transported to Tasmania.  He escaped in 1853 to America where he supported slavery and the south in the American Civil War.

He later worked with the nationalist Fenian Brotherhood in Paris, until he left in 1865 following a disagreement with the leadership.  He returned to Ireland in 1875 and was elected MP for County Tipperary, shortly before his death.

Jail Journal was published in 1854.  This edition contains the original text, an introductory narrative by Arthur Griffith and appendices including a brief biography.