Griffith: Meagher of the Sword 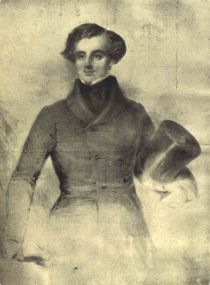 1846 drawing of Thomas Francis Meagher taken from 'Meagher of the Sword', 1916

1846 drawing of Thomas Francis Meagher taken from 'Meagher of the Sword', 1916

Thomas Francis Meagher (1823 – 1867) was born in Waterford City. He was a strong Irish nationalist who fought for Ireland’s independence from British rule. In 1848 he was exiled to Tasmania (then known as Van Diemen’s Land) but escaped to the United States, where he was very active in the Irish Independence Movement. He also joined the US Army at the outbreak of the American Civil War. Later, he became governor of Montana for one year before drowning in the Missouri River.

Meagher was famous for his passionate revolutionary speeches, gaining him the name “Meagher of the Sword”. This volume is a collection of some of Meagher’s speeches as well as his personal recollections of Ireland in July 1848, Waterford, Galway and his schooldays.

There are sixteen illustrations in this volume, some of Meagher himself. Other illustrations of interest include a letter from Meagher, autographs of prisoners in Clonmel Gaol, a sketch of Meagher’s Irish Brigade Flag of the 69th Regiment etc.

A preface is included by Arthur Griffith, who is also the editor of the volume. Griffith gives an overview of Meagher’s life and the political events in Ireland at the time. He describes him as a “knightly exemplar for young Irishmen, one who never forgot or forsook the cause of his native land, or doubted its ultimate victory.”

Previous - Devoy: Recollections Of An Irish Rebel
Next - Gwynn: The Life Of John Redmond